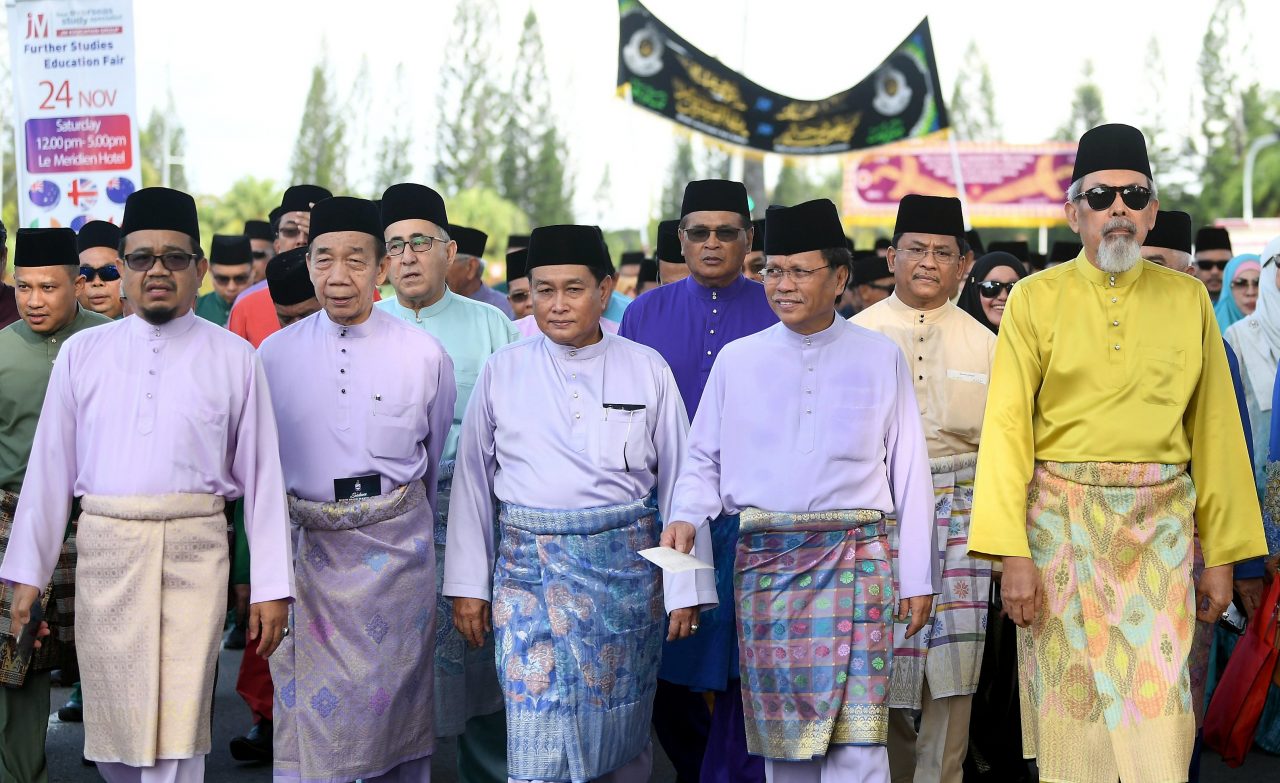 Head of State Tun Haji Juhar Mahiruddin (right) and Chief Minister Datuk Seri Mohd Shafie Apdal (second right) together with cabinet ministers joining in the Maulidur Rasul procession from Sutera Avenue to the State Mosque in Sembulan. More than 10,000 participated in the procession to commemorate the birth of Prophet Muhammad. -Bernama photo

Shafie stressed that the new state government is optimistic in maintaining and strengthening the unity among the people – to eradicate the spread of racism and extremism in the state.

“I am certain that racism, especially among Muslims, will prevent unity. Thus, it is important for us to reject not only racism but extremism as well in effort to unite the people in the State,” Shafie said in his speech at the State-level Maulidur Rasul celebration yesterday.

The celebration was officiated by the Head of State, Tun Juhar Mahiruddin. Also present was Law and Native Affairs Minister Datuk Aidi Mokhtar.

Shafie said that Syiar Islam could be tarnished if there were racists or extremists among Muslims and went on to remind Sabahans that being moderate would spur physical and economic growth for the state.

He added that the safety and welfare of the people could also attract foreign investors to come to Sabah.

“The economy aspect is an important factor in generating the strength of the Islam civilization. The Muslims’ failure to understand the importance of ‘fiqh aulawiyat’ in managing their lives would disrupt their thinking,” Shafie said.

He noted that some Muslims tend to fail to understand the ‘muamalah’ aspect when it comes to the practice of their religion. In this regard, Shafie opined that this kind of mentality could cast a bad image of Muslims.

Shafie asserted that, in line with the Prophet’s struggles, the government is also committed to spur the development of the state by implementing various programmes and injecting funds to boost the economy that would enrich the people.

The state government would do its best to provide opportunity for its people – to improve the lives of their families and the state as whole, Shafie added.

Meanwhile, Juhar, in his speech, called on Muslims in the state, including state leaders, to emulate the noble values of Prophet Muhammad to ensure continuity of their self-development, that of their family and their beloved Sabah.

“Be humble, sit together with the poor, you will be great people in the eyes of the Almighty…Islam does not want to produce pious followers and scholars, but also politicians, not only leaders with the people’s soul at heart and the ability to guide the people.

“A leader who knows well which path to take… and in all decisions made, to ensure the benefits for the people, not for own benefit,” he added.

During the event, the Maulidur Rasul awards for the male and female categories were presented to Datuk Hanan Ramli and Ustazah Zubaidah Jammadi respectively. The Maulidur Rasul Special award was given to Najion Jamil.

The awards for the contingent with the most members were won by Institut Pendidikan Guru (IPG) Kampus Gaya, Pertiwi Sabah, SMAN Papar, Madrasah Al-Hidayah Pasir Putih Putatan, and Al-Kausar mosque Tanjung Aru.   In Lahad Datu, Muslims have been urged to appreciate the celebration of Maulidur Rasul by adhering to the teachings of Islam and the Sunnah of the Prophet in everyday life.

Assistant Rural Development Minister Dumi Pg Masdal said that by practising Islamic teachings and Sunnah, good values could be instilled in them that could lead to success in the world and the hereafter.

Dumi said the dakwah agenda by the Prophet should be accepted by all parties as this noble effort could bring success in the world and the hereafter besides uniting the people.

“The Quran and Sunnah are his gifts to us. We should reflect on Prophet Mohammad’s teachings as the Prophet and his friends’ dakwah allow us to enjoy the blessings of Iman and Islam today,” he said at the Maulidur Rasul celebration held at the Dewan Tun Mustapha yesterday.

Earlier, 64 contingents participated in the parade in conjunction with the celebration while 41 contingents took part in the banner competition.