Saturday, January 28
You are at:Home»World»British PM in landmark visit to Argentina
For the freshest news, join The Borneo Post's Telegram Channel and The Borneo Post on Newswav. 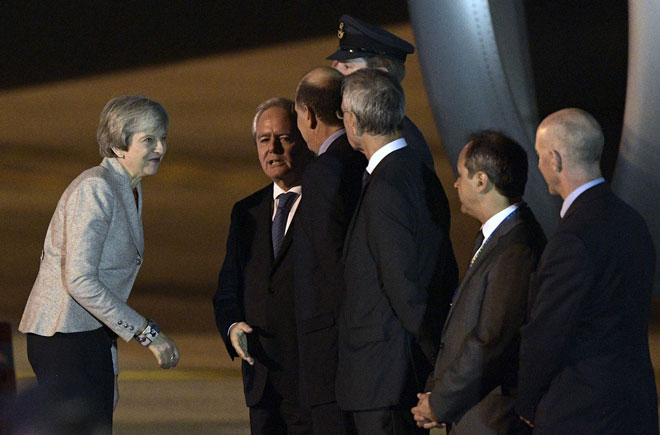 May is welcomed by Argentinian Senate’s temporary President Federico Pinedo (second left) upon arrival at Ezeiza International airport in Buenos Aires on teh eve of the G20 Leaders’ Summit. — AFP photo

LONDON: Adding to her EU divorce dramas, Prime Minister Theresa May is on a landmark visit to Argentina for the G20 summit where her hosts are using Brexit to advance their claim on Britain’s Falkland Islands.

May arrived late Thursday on the first visit by a British premier to the Argentine capital since the 1982 Falklands War between the two countries in what is being seen in Buenos Aires as a chance to improve ties.

However, the 3,400 Falkland Islanders insist their British sovereignty remains non-negotiable and say a proper thaw in their relations with Argentina remains distant.

They have reason to be worried about Brexit: if Britain leaves the European Union without a deal, the Falklands’ economy — heavily reliant on tariff-free squid exports to EU member Spain — could face a hammer blow.

Argentine Foreign Minister Jorge Faurie made waves last month, saying Buenos Aires would exploit Brexit to enhance its diplomatic push for the Falklands. Britain’s sovereignty claim to the islands, known in the Spanish-speaking world as the Malvinas, dates back to 1765 and it has held permanent administration since 1833.

Argentina’s then-ruling military junta invaded on April 2, 1982 but surrendered on June 14 to a British task force after a brief but intense and bloody war.

Faurie told AFP ahead of the summit that Buenos Aires was discussing with London the possibility of “creating more connectivity to the islands”.

“There is a lot of room still to grow in terms of confidence and trust between the two countries,” he said.

“Our expectation is that the rebuilding of bilateral trust … will constitute a sort of substantive material to discuss all other issues about the sovereignty of the Malvinas.”

Once Britain is outside the EU in March 2019, the 27 other states will no longer be obliged to support London’s sovereignty position.

Brexit is also an opportune moment for Anglo-Argentine ties: Britain is seeking new trade partners outside the EU while Argentina needs to find ways out of an economic crisis.

“Post-Brexit, (Argentines) are imagining that if the Falkland Islands has to get its economic act in order, that may open up channels,” Richard Lapper, a South America specialist at Chatham House, the Royal Institute of International Affairs think-tank in London, told AFP.

“The big prize for Britain is the prospect of very cheap agricultural imports. The Argentines may say they only want to do a deal on food if we have a side agreement on the Falklands.”

“There is an understanding that the war, and confrontation under Kirchner, made a lot of damage that cannot be undone by one administration.

“It needs to become a sustained state policy whereby future generations of Falkland Islanders no longer see Argentina as a threat but more as a neighbour that they might want to have a special relationship with.” — AFP