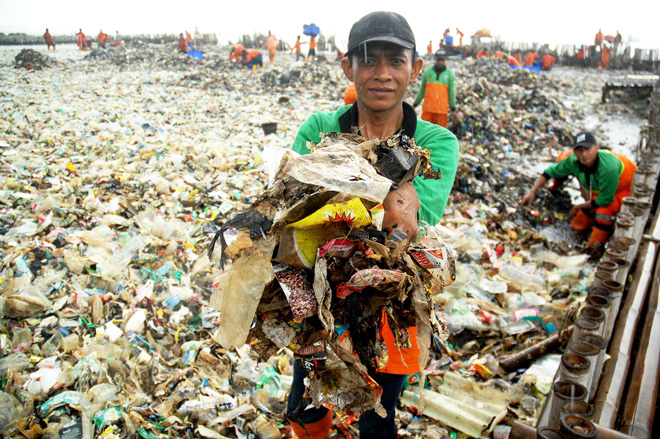 File photo shows workers clear up garbage piling up in Jakarta Bay area as part of the earliest local government combat against waste on its waters. — AFP photo

JAKARTA: Residents on a string of coral-fringed islands off Jakarta’s coast are battling a tidal wave of trash, with more than 40 tons of rubbish collected daily over the past week, an official said.

Indonesian authorities have deployed an army of staff and a fleet of boats to help clear rubbish-infested shorelines and surrounding waters, underscoring the Southeast Asian archipelago’s mammoth marine waste problem.

It is the world’s second biggest contributor to marine debris after China, producing about 1.29 million metric tons annually.

This week’s clean-up operation is centred on an area known as the Thousand Islands, a popular day trip from the traffic-clogged capital.

Residents of one island have reported dead turtles in the area, although Yusen Hardiman, head of the region’s environment department, said it was not yet clear if it was a result of ingesting rubbish.

A sperm whale was found dead last week in a marine park off Sulawesi island with 115 plastic cups and 25 plastic bags in its stomach.

Indonesia’s marine waste problem has become so bad that officials last year declared a ‘garbage emergency’ after a stretch of coast in Bali was swamped with rubbish.

Some 264 sanitation officers are involved in the ongoing clean-up of the Thousand Islands, while 13 boats regularly patrol trash-choked areas of the archipelago with another 10 set to be added to the fleet next year.

Most of the rubbish clogging the chain of islands is from elsewhere, flushed into the ocean by bulging rivers or swirling currents during the monsoon season, Hardiman said in a statement late Thursday.

Indonesia, an archipelago of more than 17,000 islands, has pledged to reduce marine plastic waste by 70 per cent by 2025.