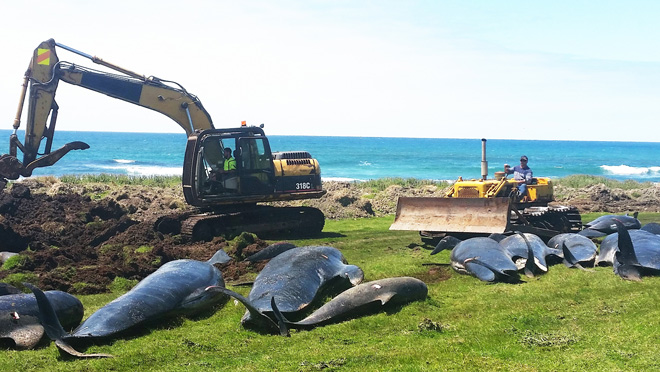 WELLINGTON: More than 50 beached pilot whales perished in New Zealand yesterday, the latest in a spate of mass strandings this week that experts have linked to rising ocean temperatures.

The dead whales were part of a pod of 80-90 whales spotted late Thursday on the shore of remote Chatham Island, about 800 kilometres east of the South Island, the Department of Conservation said.

It is the fifth stranding in New Zealand in less than a week, including 145 pilot whales which all died after they beached last weekend at Stewart Island, off the southern coast of the South Island.

By the time rangers reached the latest group of animals early yesterday 50 had died, one remained stranded but alive and the rest had refloated themselves and returned to sea.

Department of Conservation manager Dave Carlton said the surviving whale was in poor condition and was euthanised.

“It was the most humane thing to do. This is always an awful decision to have to make,” he said.

In addition to the strandings at Chatham and Stewart Islands this week, a group of 12 pygmy killer whales also beached in New Zealand’s far north and a sperm whale and a pygmy sperm whale grounded themselves in separate incidents on the North Island.

The reason whales and dolphins strand is not fully understood but theories include sickness, navigational error, geographical features, the presence of predators, and extreme weather.

Karen Stockin, a marine mammal scientist at Massey University, said while whale strandings were relatively common in New Zealand, the cluster of incidents in such a short timeframe was unusual.

She also pointed out that species such as pygmy killer whales and sperm whales did not normally beach, unlike pilot whales, which regularly wash up on New Zealand beaches in the summer months.

Stockin, who is an expert consultant on strandings for the International Whaling Commission, said it added to a string of strange whale behaviour over the past year.

In addition to a rise in strandings, she said a number of species had appeared that were not normally seen in New Zealand waters, including gargantuan blue whales in the Hauraki Gulf near Auckland.

Stockin said New Zealand was currently experiencing some of the warmest ocean temperatures on record and she believed it was affecting whale behaviour.

“We’ve had an unusual week, which we haven’t got to the bottom of, and it’s fair to say it’s been an entirely unusual year,” she told AFP.

“I suspect a lot of that has been driven by the warmer sea surface temperatures that we’re seeing at the moment.

“We definitely have a spike in temperatures, that’s likely affecting where the prey is moving and as a consequence we’re seeing prey moving and (whale) species following.”

She said one reason for the rising ocean temperature was the naturally occurring El Nino weather pattern, but global warming caused by climate change may also be playing a part.

“We certainly have the El Nino pattern in play, but the reality is I’ve no doubt it’s been further exacerbated by the potential global warming effect,” she said.

“So you’ve got a bit of both going on there… we can’t tease those things apart at this stage.”

“We’re just going into stranding season now, this is only the beginning of it and we’re very mindful of the fact that this a very busy start,” she said. — AFP