Saturday, January 18
You are at:Home»News»Sarawak»‘S’wak needs to take matters into own hands’ 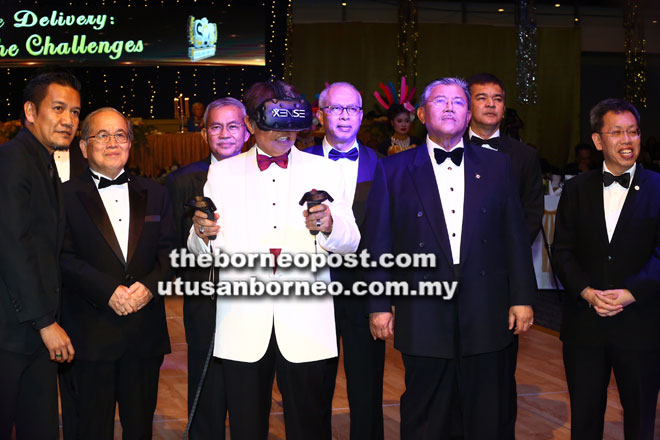 KUCHING: Sarawak will forever lag behind other states in Malaysia in terms of development, if the rate of development experienced over the past 55 years were to remain unchanged.

Chief Minister Datuk Patinggi Abang Johari Tun Openg said the sheer size of Sarawak dictates the need for more to enable the state to catch up with the more developed parts of the country – a fact that ‘administrators’ from across the South China Sea appear not to understand.

“But we can’t afford to blame others or ourselves for our shortcomings, and we also can’t hope that others will be nice to us and genuinely come to our aid. If we have too much high hope, we are making a big mistake and we do not want to make such a mistake anymore.

“This is not politics but that’s the way we should approach our development now in order to accelerate progress, particularly infrastructural facilities in our rural areas,” he said in his address at the Sarawak Civil Service (SCS) Excellence Night 2018 in Borneo Convention Centre Kuching (BCCK) last night.

Abang Johari stressed that Sarawak would not beg for money all the time to finance its development, even though it is ‘their’ obligation to give Sarawak its share of allocations.

“I always believe as a Muslim that when I come to face my creator, the angel will ask me, ‘What have you done to the God-fearing people of Sarawak to give them a good life?’, and I believe God will ask the same question to those who have not been fair to Sarawak.”

He said his focus now is to strengthen the state’s economy to ensure that greater revenue is generated in the years to come to support administration and development programmes.

According to Abang Johari, the task of implementing all the development projects that have been approved for the next two years is ‘massive’, but said the establishing of the State Development Coordination Committee is to monitor the progress of these projects and to ensure they comply with good governance practices.

“The change of federal government has not made life easy for us in Sarawak with a total of 315 ‘Projek Mesra Rakyat’ (people-centric projects) all over the state being cancelled.

“However, we cannot let our people suffer because of these cancellations. We are taking over the shelved projects for the sake of the people who are hungry for development to come their way.”

Themed Excellence Service D elivery: Rising to the Challenges, the SCS Excellence Night was attended by about 2,000 Sarawak civil servants.