Wednesday, February 1
You are at:Home»News»Sabah»Permanent export ban mulled
For the freshest news, join The Borneo Post's Telegram Channel and The Borneo Post on Newswav. 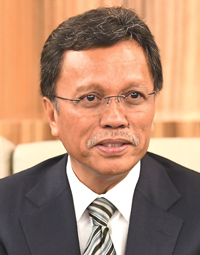 SANDAKAN: Chief Minister Datuk Seri Shafie Apdal said he was looking into permanently banning timber exports from Sabah, and would have Sabah Foundation (Yayasan Sabah) to extract, purchase and export timber from Sabah.

“I have spoken to the State Attorney to look into our budget to make this happen. We want to stop the old practice in which several private companies monopolised the timber industry in Sabah. The same company extracted, purchased and exported Sabah’s timber, so it was very hard for us to monitor because it was the same company.

However, he said the plan to permanently ban timber export from Sabah would require consideration on several matters, including the implication on the aspects of law, economy, social and more.

Shafie said this after he launched the new State Forestry Policy at the Forestry Department here yesterday.

On the new policy, Shafie said it was needed considering the change in the environment, and also to ensure that flora and fauna, as well as wildlife were preserved.

The new policy, which consists of seven core thrusts, is replacing the previous policy that was drafted in 1954 in which Shafie said was no longer suitable with the current forest management development.

“To ensure that we move forward, I have ensured that we have ‘value added’ in our timber. Sabah is no longer dependent on revenue from timber like back in the 60s and 70s. Now we generate RM150 million to RM200 million from timber royalties.

“But, if we go downstream with added value, I am confident that it will not only increase the state’s income, but also create job opportunities for Sabahans.

“Next week or mid-month, I am confirming a furniture factory that can produce furniture to be exported to Maldives with our timber.

“With the condition of our current economy, we need to be more creative and innovative in generating income for Sabah. If we only wait for (timber), we will get about RM100 million to RM200 million, depending on the market price. However, if we go downstream, value added, we could reach (income of) RM10 billion to RM20 billion in the future.

“If we plant high-value wood like Red Seraya, Acacia, Eucalptus and Belian, Sabah will be generating a lot of income in 30 to 50 years to come,” he said.

Meanwhile, Shafie said the government was aiming to have 30 per cent of its land mass, or 2.2 million hectares as Totally Protected Areas by 2025, which is five years more than the target set by the previous government.

“We are extending the time a little because we are actually looking into how best we can manage it (TPA), because we have been receiving calls from international bodies to look into (the impact of the target) on the environment.

“We need to have detailed and in-depth study, because this (plan) is very complex. In the end what is more important is that we are not focusing on generating income (by cutting down trees), but in preserving the environment, flora and fauna and wildlife,” he added.

Previous ArticlePBS: Why 1MDB, why not MA63?
Next Article Sandakan to become Sabah’s furniture manufacturing hub