Saturday, August 15
You are at:Home»News»Sarawak»Ex-teacher fined RM15,800 for disposing of stolen items 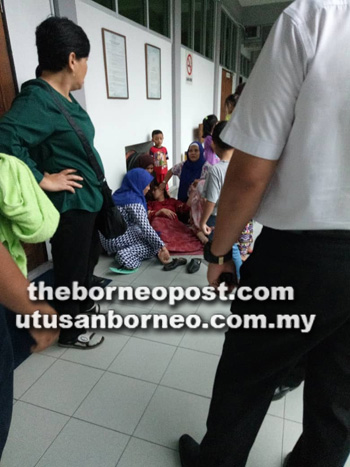 People are seen surrounding the accused, who fainted when police were preparing to take her to prison.

SIBU: A 28-year-old former teacher of a school in Dalat was fined RM15,800 by the Magistrate’s Court here yesterday after she was found guilty of four counts of voluntarily disposing of stolen items.

Nur Syakira Ellis Bernard faced four charges under Section 414 of the Penal Code, which carries an imprisonment term of up to seven years or a fine, or both, upon conviction.

Nine prosecution witnesses and one defence witness – the accused herself – gave testimonies throughout the trial period.

On the first charge, Nur Syakira is accused of committing the offence on July 19, 2016 at about 11.45am in Mukah, where she voluntarily disposed of one unit of stolen Panasonic-brand television.

For the second charge, she is accused of disposing of two units of stolen gas cylinders on July 17, 2016, at 8.50am in Mukah.

As for the fourth charge, she is accused of disposing of two units of stolen gas cylinder and one electric drill on July 16, at about 5pm, in Dalat.

For the second, third and fourth charges, she was fined RM4,000 in default two months’ imprisonment each.

In mitigation, defence counsel Fabian Andrew Sigar told the court that his client felt remorseful and promised to turn over a new leaf.

Nur Syakira is a mother of four children, with the youngest one five months old, and the oldest five years old, who are presently under her care.

After the judgment announced at about 5pm, the accused fainted as police were preparing to take her to prison.

The accused experienced dizzy spells while waiting for the RM15,000 from her relatives, who were on their way to the court to make the payment.

The accused was then brought to Sibu Hospital for treatment. She managed to pay the fine.

Previous ArticleSEB, Shells MDS exploring future of hydrogen economy in Sarawak
Next Article Murder case up for mention at Sessions Court this Feb 19