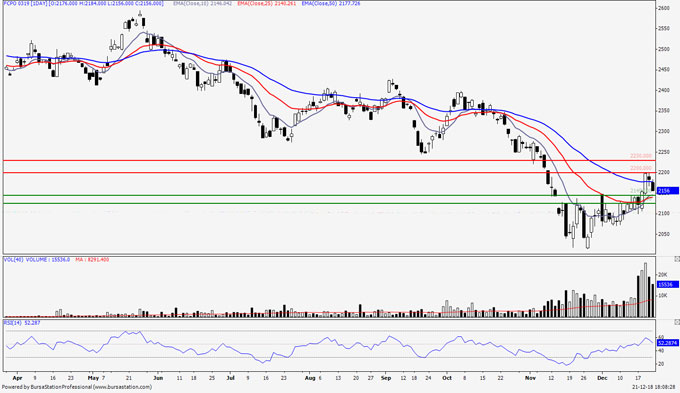 The Malaysian palm oil futures (FCPO) failed to maintain its previous rally, in line for a second day of losses, weighed down by US soybean oil and profit booking.

However, there was a 0.1 per cent decrease to 247,986 contracts from 248,236 contracts on the daily average open interest as compared with previous week.

Societe Generale de Surveillance (SGS) reported an increase of 6.9 per cent in exports of Malaysian palm oil products during December 1 to 20 to 879,491 tonnes from 822,620 tonnes shipped during November 1 to 20.

After the temporarily ceased fire of the trade war on December 1, China promised to restart purchase of soybean oil from the US for the first time in six months. Since then, a total of five million tonnes of soybean oil have been purchased in December.

As compared with the previous purchase during last December, Chinese importers bought only around four million tonnes of US soybean oils.

However, season-to-date sales coming into the month last year were 40 times greater at 20.6 million tonnes, compared with about 515,000 tonnes at the beginning of this month.

Overall, the lower-than-expected purchases from Chinese importers did not boost the market’s sentiment.

Rains in dry areas of Brazil and Argentina were seen as bolstering crops that are already projected to be massive.

With the harvest in Brazil already starting, the window of opportunity to export large quantities of US soybeans is narrowing.

Crude oil price also fell around five per cent, hitting its lowest level in more than a year.

Both crude oil fell after the US Federal Reserve raised rates on Wednesday and maintained most of its guidance for additional hikes over the next two years, dashing investors’ hopes for a more dovish policy outlook.

However, the Organisation of the Petroleum Exporting Countries and other oil producers including Russia agreed this month, to curb output by 1.2 million barrels per day (bpd) in an attempt to drain tanks and boost prices.

But the cuts will not happen until next month, and production has been at or near record highs in the US, Russia and Saudi Arabia.

Palm oil prices have been impacted by changes in soyoil and crude oil prices in recent sessions, as they compete for a share in the global vegetable oil market.

The dollar consolidated overnight losses on Friday and is set for its biggest weekly drop in 10 months as the threat of a US government shutdown and lower bond yields on the back of concerns of slowing economic growth weigh.

FCPO challenged the key psychological level of 2,000 on Wednesday, but failed to break through the level and retraced, breaking support level at EMA 50, indicating FCPO is still in the bearish zone despite rebounding from earlier sessions.

RSI also failed to break through the 60 level and retrace, indicating the bear is still in control. Overall, FCPO is still in a bearish zone.

In the coming week, FCPO might continue to trade lower. If FCPO fail to break below the first support level, it may trade towards the first resistance level.

AmSpec and SGS reports will be released on December 25 (Tuesday).