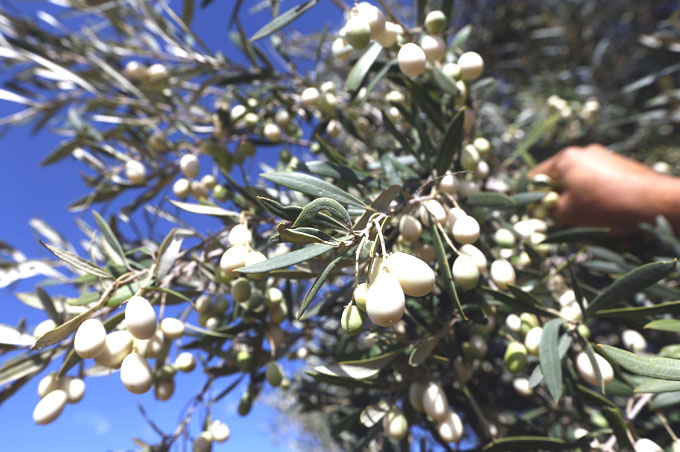 A rare white olive tree, originating from Tuscany in northern Italy and known as olea leucocarpa, which grows fruits that keep their light colour even when ripe, is seen in the Libyan town of Tarhuna (80 kms) south of Tripoli. — AFP photo

TARHUNA, LIBYA: Stretching as far as the eye can see groves of gnarled olive trees in northwest Libya have proudly withstood the country’s devastating conflicts.

But the industry of extracting olive oil, often dubbed ‘green gold’, is now under threat after Libyan authorities halted exports in a bid to ‘protect’ local produce.

Libya has depended heavily on exports of its ample crude oil reserves since the 2011 fall of longtime ruler Moamer Kadhafi.

The North African nation, mired in bitter internal conflicts since Kadhafi’s ouster, has failed to diversify its economy despite the enormous potential of its tourism and fisheries industries.

But in Tarhuna, farmers and workers at olive presses view such pledges with scepticism.

“We constantly have problems getting spare parts, which are getting expensive because of the collapse of the dinar against the dollar, but also because of the cost of the oil extraction process,” said Zahri al-Bahri, owner of a press in Tarhuna.

On his farm, olives heavy with oil are harvested by hand in order not to damage the trees.

Laid out on huge sheets, the ripened crop is transported in flour sacks to the presses where their rich, redolent oil is carefully extracted.

“There is enough production in Libya,” said Bahri. “I don’t understand why we can’t export anymore.”

Exports of Libya’s most emblematic products – namely dates, honey and olive oil – have been halted since 2017.

A decree at the time said the suspension would be ‘temporary’ to meet domestic market needs.

But no date has yet been set to resume exports.

Justifying the ban, an official in the agriculture ministry said produce had been “exported in bulk at low prices and without adding value for the Libyan economy”, leaving domestic demand for oil to be met by expensive imports.

Frustrated farmers continue to grapple with a dearth of specialised bottling and packaging plants, leaving them unable to climb the value chain.

Although olive trees have grown on the Libyan coast for centuries, most of the current groves were planted by Italian settlers in the 1930s.

“My farm has existed for almost 90 years when Italians occupied Libya and brought the land back to life,” Ali al-Nuri, a farm owner in Tarhuna, told AFP, posing proudly in a grove.

Libya, the 11th largest olive producer in the world, grows around 150,000 tonnes of the crop annually.

But only 20 per cent is turned into oil, well behind neighbours Morocco, Tunisia and Algeria, according to the United Nations’ Food and Agriculture Organisation.

Nuri emphasises the industry requires more attention and resources to prosper, beginning with better irrigation in this desert region, as well as state help to ensure quality control and set up bottling factories.

And while cheaper, imported alternatives to olive oil – such as corn oil – have become part of Libyan cuisine, “olive oil remains (the) paramount” choice among householders, Nuri said.

Olive trees, he recalled, had “saved” Libyans during lean periods before the discovery of crude oil in the late 1950s.

The olive tree was a “nourishing mother,” he maintained.

Among the hundreds of olive trees on Nuri’s vast farm, there is a particularly rare variety – white olives.

Originating in Tuscany in northern Italy, the tree – known as olea leucocarpa – grows olives that keep their light colour even when ripe.

But Tarhuna only has five or six specimens, planted by the Italians.

In the absence of scalable production, the white olives – sweet, with a low acidic content and a distinct scent – are mixed with their bog-standard cousins to produce oil.

Only two per cent of Libya’s 1.7 million square kilometres (650,000 square miles) is arable land, in a country famed for vast swathes of desert.

It boasts more than eight million olive trees, according to the agriculture ministry.

To the east of Tarhuna lies the Msallata region known for its centuries-old olive trees that yield distinct sweet and strong-tasting oil.

But it has been hit by urbanisation in recent decades.

Cutting down olive trees had been strictly forbidden before Kadhafi came to power in 1969, said Mokhtar Ali, whose farm includes 600-year-old specimens.

And the chaos that has engulfed the country since Kadhafi’s fall has further diminished the stock of trees.

Nowadays “olive trees are torn up with impunity to make charcoal or to replace with concrete,” Ali said.

But he remains optimistic, seeing a silver lining in attempts by several farmers to preserve the country’s heritage, by either planting native species or importing new trees from Spain. — AFP