Saturday, October 23
You are at:Home»News»Sarawak»Pedestrian killed in apparent hit-and-run accident 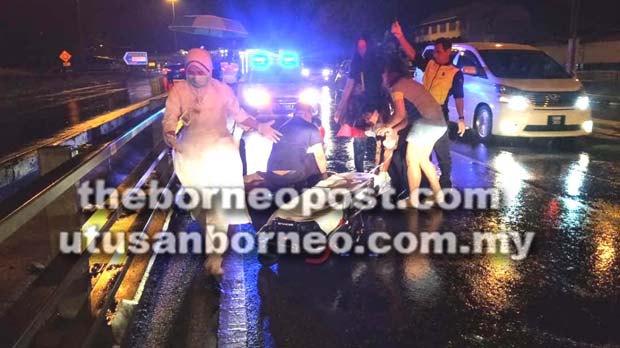 Paramedics from Miri Hospital arrive at the scene to check on the victim.

MIRI: A pedestrian succumbed to his injuries while being treated at Miri Hospital following an apparent hit-and-run accident at Puchung flyover (in front of MCC field) on New Year’s Eve.

The deceased, identified as Thomas Yong Teck Khiong, 52, was pronounced dead while being treated at the emergency unit of the hospital.

According to a statement from Sarawak Traffic Investigation and Enforcement Department chief Supt Alexson Naga Chabu, in the 10.40pm incident, the victim was crossing the road at the end of the flyover when a car suddenly rammed into him.

“The car sped off from the scene while the victim was rushed to Miri Hospital in an ambulance, but succumbed to his injuries a few hours later at the hospital,” Alexson said.

Previous ArticleBNM likely to maintain OPR at 3.25 per cent
Next Article ‘Decision to set up GPS a new dawn for Sarawak’