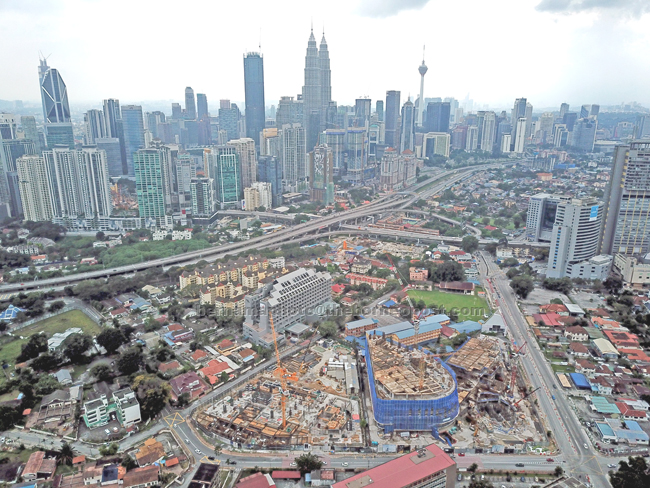 KUCHING: The construction sector is set to face lacklustre contract flows in the first half of current year 2019 (1H19), analysts project in a sector update.

According to the research arm of Kenanga Investment Bank Bhd (Kenanga Research), for financial year 2018 (FY18), the total contracts secured by listed companies only amounted to RM18.9 billion, a drastic drop of 48 per cent year on year (y-o-y), after the conclusion of the cost review in LRT3 and MRT2.

“However, we do not expect any news-flow on the abovementioned projects in the near term as we are expecting the contract awards to kick in earliest by 2HCY19.

“Hence, we believe that contractors would be vying for more private jobs such as low-cost housing, high-rise buildings, malls, office redevelopment projects, and private or specialist hospitals in the near term.”

The research arm thus believed that contracts secured by listed companies would be similar if not higher.

“In the event that contracts secured are lower than FY18, we see minimal downside risks to KL Construction Index’s (KLCON) valuation from here as now it is already trading at through levels, at 10-year –3SD levels and we do not expect more negative news-flow like project cancellation for mega infrastructure projects.”

“At seven-fold price earnings ratio (PER) (-3SD level), the KLCON is trading at extraordinary weak levels compared to the 2008 Global Financial Crisis (GFC) when it traded at a trough level of eight-fold which was then at -2.0SD.

“Interestingly, at its through levels back in 2008, KLCON was trading at a discount of 13.8 per cent to KLCI. But today, KLCON is currently trading at unprecedented low-level of seven-fold which is at -3.0SD level (as of our cut-off date of December14, 2018) in 10 years, with a discount of 58 per cent KLCI’s valuation, whereby both Fwd PER valuation and discount to KLCI are now at -3.0SD levels, which we believe is at severely oversold levels.”

Kenanga Research believed that the expansion in KLCON’s discount factor to KLCI could be due to the change in government as most contractors rely on government’s infrastructure projects, and the unexpected termination of Gamuda Bhd’s MRT2 underground works could have further shaken investors’ confidence in the sector.

The research arm noted that this was due to the uncertainties on potential project cancellations or cost reviews in the future by the government, coupled with an uninspiring Budget-2019.

“We opine that the recent change in government is akin to the changes in any company’s top management team, where short-term uncertainties and changes are inevitable.

“However, we remain positive that after all the kitchen sinking and cost reviews, the sector might see more positive news-flow and competitive tenders amongst contractors going forward as we would expect more tenders to be called under Competency, Accountability and Transparency (CAT) policy, especially on the above-mentioned projects.”