Tuesday, August 9
You are at:Home»World»Thailand says Saudi woman in asylum case to be sent back 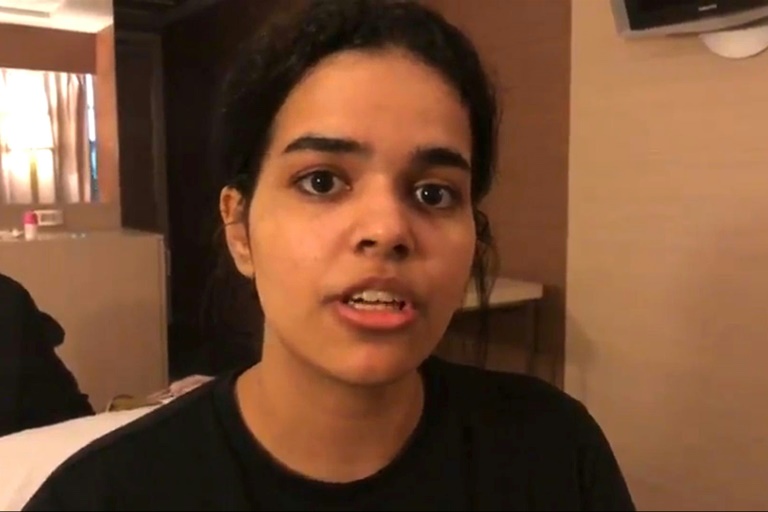 Rahaf Mohammed al-Qunun says she will be killed if she is repatriated to Saudi Arabia by Thai immigration officials. – AFP photo

A Saudi woman being held at Bangkok airport will be sent back Monday, Thai authorities said, after she made a desperate plea for asylum and for other passengers to help protest her deportation.

The incident comes against the backdrop of intense scrutiny of Saudi Arabia over its investigation and handling of the shocking murder of journalist Jamal Khashoggi last year, which has renewed criticism of the kingdom’s rights record.

Rahaf Mohammed al-Qunun told AFP she ran away from her family while travelling in Kuwait because they subjected her to physical and psychological abuse.

The 18-year-old said she had planned to travel to Australia and seek asylum there, and feared she would be killed if she was repatriated by Thai immigration officials who stopped her during transit on Sunday.

Thai immigration chief Surachate Hakparn said that Qunun was currently “waiting for boarding, our immigration officer and Saudi Arabian embassy officials are with her”.

“She bought the ticket herself yesterday, she is waiting to board (the flight to) Saudi Arabia,” he said of the Kuwait Airways flight to Kuwait due to depart at 11:15 am (0415 GMT).

Asked if she was seeking asylum, he said “we do not know but if anyone wants to seek asylum, they have to wait for those countries to reply”.

Qunun said she was stopped by Saudi and Kuwaiti officials when she arrived at the Thai capital’s Suvarnabhumi airport and her travel document was forcibly taken from her, a claim backed by Human Rights Watch.

“I ask the… government of Thailand… to stop my deportation to Kuwait,” she said on Twitter. “I ask the police in Thailand to start my asylum process.”

Shortly before the scheduled departure, Qunun posted a plea for people within “the transit area in Bangkok to protest against deporting me”.

“Please I need u all,” she wrote. “I’m shouting out for help of humanity.”

In a sign of growing desperation during the night, Qunun posted video of her barricading her hotel room door with furniture.

If sent back, she said she will likely be imprisoned, and is “sure 100 percent” her family will kill her, she told AFP.

A senior Thai immigration official said Sunday that Qunun was denied entry because she lacked “further documents such as return ticket or money”, and Thailand had contacted the “Saudi Arabia embassy to coordinate”.

Phil Robertson of Human Rights Watch said Qunun “faces grave harm if she is forced back to Saudi Arabia”, and that Thailand should allow her to see the United Nations High Commissioner for Refugees (UNHCR) and apply for asylum.

“Given Saudi Arabia’s long track record of looking the other way in so-called honour violence incidents, her worry that she could be killed if returned cannot be ignored,” he said.

The UNHCR said that according to the principle of non-refoulement, asylum seekers cannot be returned to their country of origin if their life is under threat.

“The UN Refugee Agency has been following developments closely and has been trying to seek access from the Thai authorities to meet with Rahaf Mohammed Alqunun, to assess her need for international protection,” it said in a statement Monday.

The ultra-conservative kingdom has long been criticised for imposing some of the world’s toughest restrictions on women.

That includes a guardianship system that allows men to exercise arbitrary authority to make decisions on behalf of their female relatives.

In addition to facing punishment for “moral” crimes, women can also become the target of “honour killings” at the hands of their families, activists say.

Abdulilah al-Shouaibi, charge d’affaires at the Saudi embassy in Bangkok, acknowledged in an interview with Saudi-owned channel Rotana Khalijial that the woman’s father had contacted the diplomatic mission for “help” to bring her back.

But he denied that her passport had been seized and that embassy officials were present inside the airport.

Saudi Arabia has come under fierce criticism following the murder of dissident journalist Khashoggi inside the kingdom’s Istanbul consulate on October 2 — a case that stunned the world.

Another Saudi woman, Dina Ali Lasloom, was stopped in transit in the Philippines in April 2017 when she attempted to flee her family. – AFP