Friday, June 5
You are at:Home»Business»BizHive»Sentiment weak, market may continue to stay directionless

Global markets indices and commodities performances as at January 11. 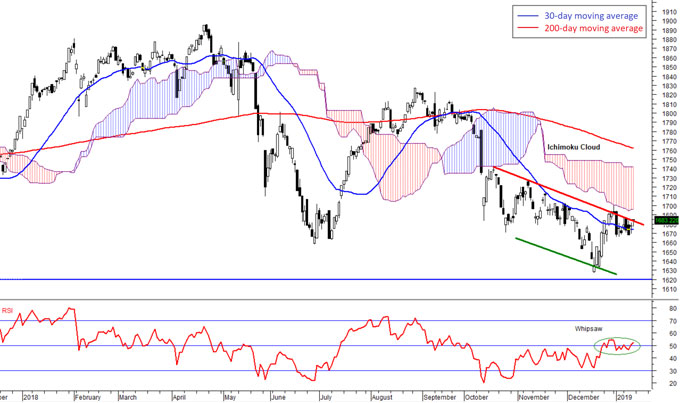 The FBM KLCI rebounded as expected last week but was not able to rally and ended up closing marginally higher. The increase was in line with global markets performances. The index increased 0.8 per cent in a week to close at 1,683.22 points last Friday on significantly higher trading volume.

Global markets were generally bullish for the second since the beginning of this year. In Asia, Singapore led the pack as the Straits Times Index increased 4.6 per cent in a week to its highest level in three months. European, UK and US markets closed higher as well but not as strong as the Asian markets.

In the commodities markets, gold continued to be supported on equity markets uncertainty. Gold (COMEX) increased 0.1 per cent in a week to US$1,287.90 an ounce last Friday.

Crude oil (Brent) continued its bullish momentum for the second week and increased 5.5 per cent to US$60.59 per barrel. Crude palm oil (BMD) rose only 0.1 per cent to RM2,173 per metric ton last Friday.

Despite the increase, the market was mostly directionless last week. The FBM KLCI traded between 1,667.83 points and 1,687.13 points.

The index failed to test the resistance level at 1,702 points and this indicates lack of confidence. However, the index was also not bearish.

Technically, the FBM KLCI is directionless as it whipsawed against the short term 30-day moving average in the past two weeks.

However, the market trend is still bearish as the moving average is declining and the index is below the long term 200-day moving average and Ichimoku Cloud indicator.

Momentum indicator continued to be mixed. The RSI and Momentum Oscillator rose above their mid-levels but the whipsaw against their mid-levels indicate a lack of momentum from both bearish and bullish strength. However, the MACD indicator was still above its moving average.

In the last article, I mentioned that if the index fails to climb above the resistance level at 1,700 points, the trend shall remain bearish.

Based on the market performance in the past two weeks, the FBM KLCI is expected to be directionless and probably even test 1,700 points. Like last week, the index may fall further if it fails to climb above the resistance level.