Thursday, February 2
You are at:Home»World»Car bomb hits Syria regime stronghold Latakia killing one
For the freshest news, join The Borneo Post's Telegram Channel and The Borneo Post on Newswav. 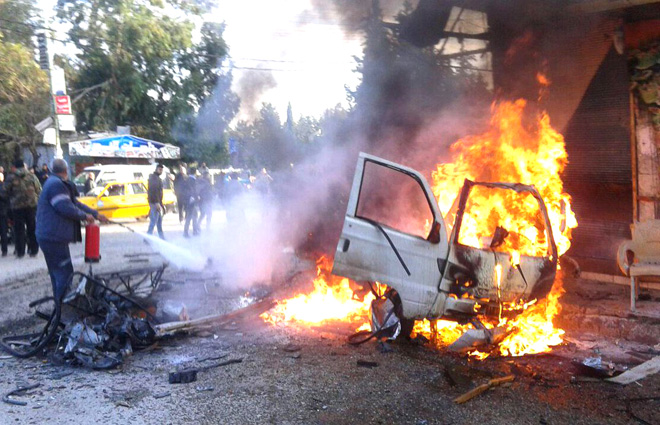 Photo shows onlookers and security forces gathered around a burning vehicle in the city of Latakia. — AFP photo

DAMASCUS: A car bomb shook the Syrian regime’s coastal stronghold of Latakia on Tuesday, killing one person and wounding more than a dozen others, state news agency SANA reported.

Authorities found a second explosive device in the same place and defused it just before it was due to blow up, it said.

The other bomb exploded in the city’s Al-Hammam square, according to SANA, which published video footage showing a burnt-out car surrounded by firefighters and soldiers.

“The terrorist explosion caused the death of one civilian and wounded 14 others,” it said, citing a top health official in the province.

Earlier, it had reported that the person killed was the driver of the vehicle.

Most of those wounded were hit by shrapnel, the director of the city’s Tishrin hospital, Louay Naddaf, told state television.

Latakia is the fiefdom of President Bashar al-Assad’s family.

The city, the capital of Latakia province located on the shores of the Mediterranean Sea, has largely escaped the violence that has devastated other regions of Syria since the conflict began in 2011. But the province has been targeted by ‘sporadic strikes’ by rebels or jihadists, according to the Syrian Observatory for Human Rights, a Britain-based war monitor.

The region abuts the last major area outside of the regime’s control and which includes much of Idlib province as well as adjacent parts of Hama and Aleppo provinces. — AFP