Sunday, August 9
You are at:Home»News»Sabah»Prices of CNY staples spike due to big demand in China 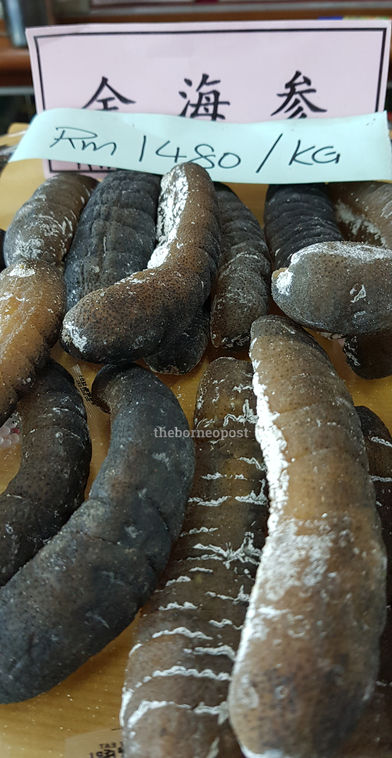 Sea cucumber and fish maw are 40 per cent more expensive this year.

According to the owner of renowned traditional Chinese medicine in the city, who wished to remain anonymous, sea cucumbers and fish maw are 40 per cent more expensive this year due to high demand in China market.

In fact, he revealed that a seafood processing plant fully owned by China-national had been set up in Kota Kinabalu Industrial Park (KKIP) where it acquires sea cucumber and fish maw in large volumes and export the products to China in frozen form.

“The seafood are cleaned, processed and frozen immediately upon reaching the factory to ensure quality of the products is at optimal level when they are shipped to China.”

He said sea cucumbers, mainly from Kudat and the Philippines, now cost RM1,000 to RM1,500 per kilogram (kg) depending on the size as compared to RM700 to RM1,000 per kg previously.

Similarly, the price of locally-produced bird’s nests has shot up 40 per cent as well as China-nationals are buying the product in large quantities.

On the other hand, dried scallops imported from China and Japan are 30 per cent more expensive due to supply shortage, pushing the price to RM 800 to RM 1,000 per kg.

Likewise, canned abalone costs five to 10 per cent more due to the Sales and Services Tax (SST), whereas premium shittake mushrooms are priced RM 150 to RM 200 per kg, marking an increase of 20 per cent.

To a question, the owner said sales this year was extremely slow.

“I used to import 20 cartons of canned abalone (each box containing 24 cans) in the past.

“This year, I only imported six cartons because of the market slowdown,” he added.