Thursday, June 4
You are at:Home»World»Russia marks end of Leningrad siege with military parade 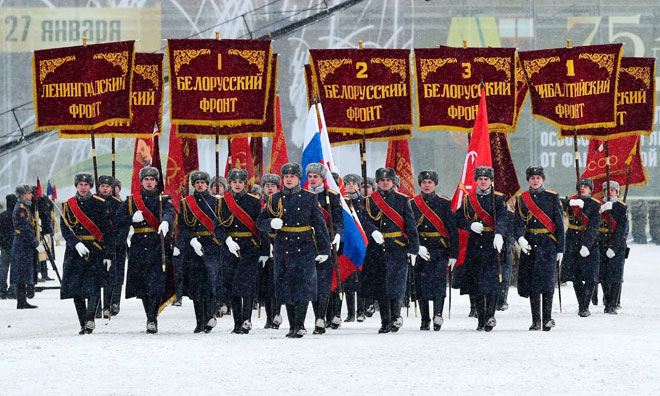 Russian servicemen march during the military parade marking the 75th anniversary of the lifting of the Nazi siege of Leningrad, at Dvortsovaya Square in Saint Petersburg. — AFP photo

SAINT PETERSBURG: Tanks and air defence missile systems rolled through the heart of Saint Petersburg yesterday as the city formerly known as Leningrad marked the 75th anniversary of the end of a World War II siege that claimed more than 800,000 lives.

The parade in Russia’s second city was the first time war-era and modern heavy weaponry, including the famed T-34 battle tank and multiple-launch rocket systems, have trundled past the Hermitage Museum to mark the end of the siege of Leningrad, sparking controversy with some survivors criticising ‘militarism’.

President Vladimir Putin, a native of Saint Petersburg, chose to skip the show of force in the snow-covered Palace Square, though he will attend several other commemorative events.

More than 2,500 servicemen in modern and period uniforms including sheepskin coats and felt boots took part in the parade.

Hundreds of spectators watched the performance in falling snow and temperatures of minus 11 degrees Celsius, some wrapped in blankets against the cold.

A moment of silence was observed to the ticking of a metronome used to warn residents about air-raids during the siege.

Some clutched flowers and could not hold back tears.

“This is a celebration for the city and the country,” said Ivan Kolokoltsev, a 45-year-old manager.

“We have to remember, we have to commemorate it so that people remember.”

“A military parade is very beautiful,” the 35-year-old said.

Encircled by the Nazi troops for 872 days between 1941 and 1944, the city of around 3 million people went through unspeakable horrors.

With supplies to the city cut, bread rations plunged to 250g for manual workers and 125g for other civilians.

More than 800,000 people starved to death or died of disease and shelling. Numerous historians say the true figures are higher.

Many in Saint Petersburg, including some siege survivors, have denounced the parade as misplaced sabre-rattling and militaristic propaganda.

Historian Vyacheslav Krasikov, whose mother and grandmother survived the blockade, has said that conducting the military festivities would be like holding parades at the Auschwitz or Buchenwald concentration camps.

A defence ministry official has said the event was not celebratory in nature, describing it as a ‘soldierly ritual’.

Kremlin spokesman Dmitry Peskov said the day was important “for all Russians and personally for President Putin.”

But his older brother died in childhood during the devastating siege and is buried in a mass grave at Piskaryovskoe. — AFP 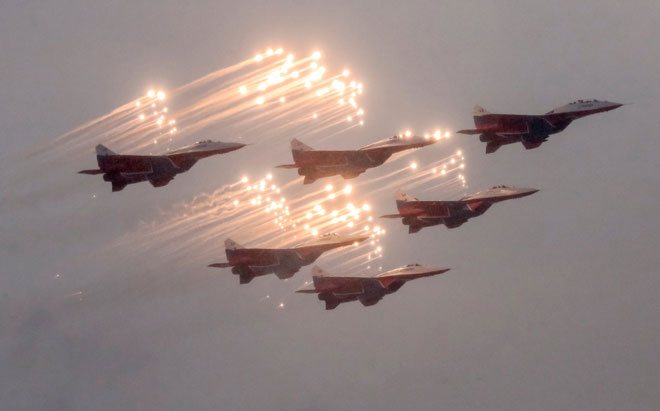 Russian aerobatic team Strizhi (The Swifts) performs on MIG-29 during the parade to mark 75 years since Leningrad siege was lifted during the World War Two, in Saint Petersburg. — Reuters photos