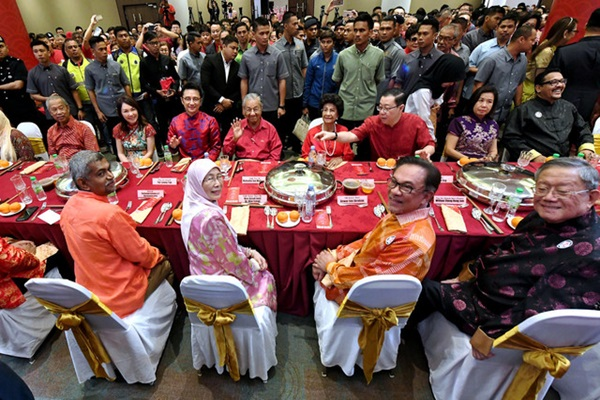 Dr Mahathir and his wife, Tun Dr Siti Hasmah Mohamad Ali, both in red attire, arrived at 10.40 am and were welcomed by Lim.

Thousands of people from the various communities attended the open house, which began at about 10 am.

Dr Mahathir, Dr Siti Hasmah and the other guests participated in the traditional tossing of the ‘yee sang’ salad that symbolises good fortune, prosperity and all things profitable.

Lim, in a speech, said the open house was held in an atmosphere of goodwill as it was organised jointly by the chambers of commerce which represented the Malay, Chinese and Indian communities.

He said inter-racial goodwill was the character promoted by the Pakatan Harapan (PH) government led by Dr Mahathir.

“I am confident that the unity of the people can help us achieve sustainable economic development.

“Let us show that Malaysians can rise again so that the country can be known as an Asian economic tiger,” he said.

Guests at the open house were entertained to the traditional dances of the various races.