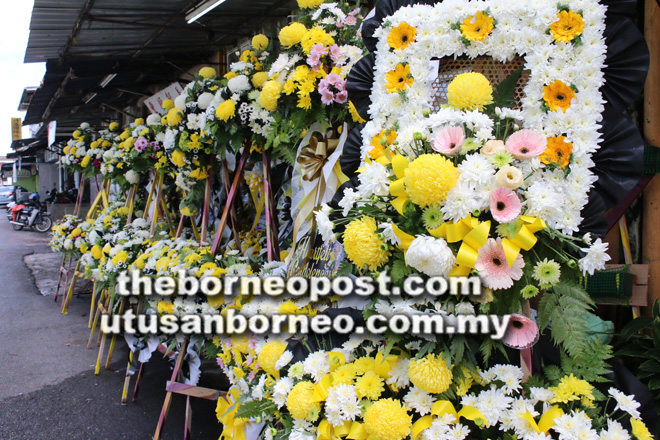 Some of the finished funeral standing sprays for the late Andrew at a florist shop in Rejang Park yesterday.

SIBU: A post-mortem conducted Monday on Dato Andrew Wong revealed he had suffered a haemorrhage on the left side of the brain and internal bleeding.

District police chief ACP Stanley Jonathan Ringgit said however that the cause of death had yet to be ascertained as police are still waiting for further laboratory reports from Sibu Hospital. 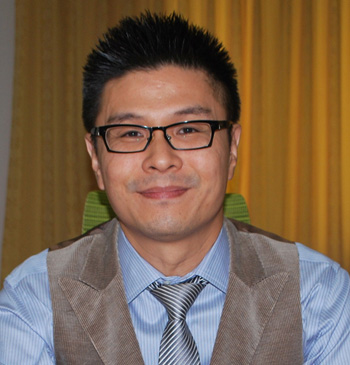 “The cause of death has not been revealed. The cause can only be determined once we have received the official report, together with the blood test results from the laboratory,” he said yesterday.

He also disclosed that the internal bleeding involved the esophagus and stomach.

The post-mortem, he added, began at 3pm and took a few hours to complete.

Andrew, 43, was the former deputy chairman of Sibu  Municipal Council.

He was the only son of Second Finance Minister Dato Sri Wong Soon Koh and Datin Sri Pauline Leong.

Leong found him unconscious on his bedroom floor around 9pm on Sunday and immediately called for a doctor to resuscitate him.

However, Andrew was pronounced dead about two hours later.

Meanwhile, florists in Sibu have put aside orders for Valentine’s Day as they work around the clock to prepare funeral standing sprays for Andrew.

Several of them, when met by The Borneo Post yesterday, said the flowers have to be delivered today for Andrew’s wake at Nirvana Memorial Park in Jalan Oya.

A florist at Jalan Tunku Osman said like most other florists in town, she is running short of fresh flowers.

“The orders have come suddenly, and we have to deliver. All our workers are working very hard today (yesterday).

“Our flowers are from Peninsular Malaysia.  The next order of supply will arrive tomorrow (today), so we have to work around the clock to make sure we can deliver on time,” she said.

Florists in Jalan Central and Rejang Park are hard at work to meet orders.

“This (Andrew’s demise) is of course unexpected sad news. Now that we have received the orders (for funeral standing sprays), we have to do our best to deliver,” said the Jalan Central florist.

Members of the public who
want to pay their last respects can do so at the Nirvana Memorial Park Hall here from 9am to 5pm today.

The funeral service is scheduled from 8am tomorrow (Thursday) at Nirvana Memorial Park Hall followed by the cremation.