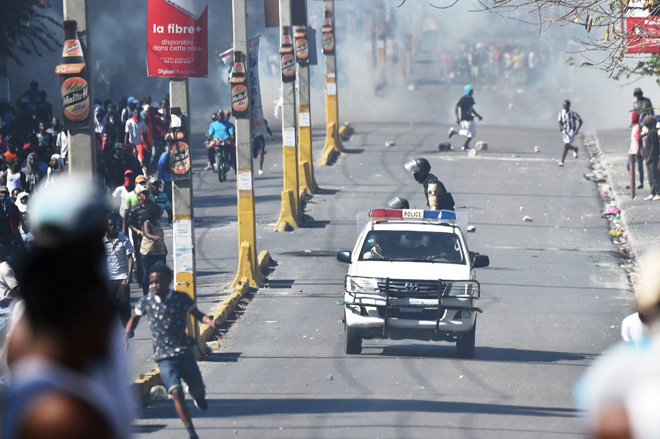 Haitian police patrol the streets as they try to break up a demonstration on the fifth day of protests in Port-au-Prince. — AFP photo

PORT-AU-PRINCE: Sporadic gunfire echoed through the streets of Port-au-Prince on Monday as the government remained silent in the face of protests that have paralysed the Haitian capital and triggered rising violence.

The normally traffic-clogged streets were largely empty as schools, shops and municipal offices were shuttered for fear of more violence that has already left several people dead and an air of uncertainty hanging over the government of President Jovenel Moise. Barricades have sprung up in some areas of the capital and other cities, as protesters have taken to the streets demanding the president step down over reports of mismanagement and possible embezzlement of development funds in the impoverished Caribbean nation.

After a quiet but tense start to the day, hundreds of youths from the capital’s poorer quarters marched toward Petionville, the wealthiest neighbourhood in Port-au-Prince, throwing stones at houses until police opened fire with tear gas rounds to break up the march.

Police also thwarted an attempt to attack a bank during the demonstration, dragging away several blood-stained suspects and making five arrests.

In some places, young men have erected barricades and seized bypassers for ransom, while vehicles have been torched, and shops damaged and looted, creating a climate of fear and intimidation alongside the opposition protests.

Taking advantage of the chaos, there was some looting Monday — but traders still felt anger only toward the president.

“What we are enduring today is because of Jovenel (Moise)… they are hungry,” said Joseph, whose stock of fish was totally depleted, of those who stole his goods.

“By selling what they took from me, they are going to be able to relieve their families a bit.”

“We don’t have good leaders: if there was work in the country, this would never have happened,” he said. Later on, private sector associations deplored what they described as “legitimate popular anger that is unfortunately wrongly directed to companies that create jobs,” and called for political dialogue.

Meanwhile, Catholic bishops appealed to the ‘civic conscience of the different parties’ to make a “patriotic decision.”

Demonstrators are demanding Moise quits over a scandal centering on the Petrocaribe fund, under which Venezuela supplied Haiti and other Caribbean and Central American countries with oil at cut-rate prices and on easy credit terms for years.

Investigations have shown that nearly US$2 billion from the programme were misused.

A report released in January on the misuse of the money also named a company that was then headed by Moise as a beneficiary of funds from a road construction project that never had a signed contract.

During his election campaign, Moise promised ‘food on every plate and money in every pocket’, yet most Haitians still struggle to make ends meet and face inflation that has risen 15 per cent since his election.

“We call on the police to arrest Jovenel Moise because he represents a danger and a threat to the life of every Haitian,” said Andre Michel, one of the main opposition leaders.

“He no longer has any legitimacy: the country will remain deadlocked until Jovenel Moise resigns.”

A mediation group composed of a senior UN official, the ambassadors of Brazil, Canada, France, Germany and the United States, and representatives of Spain, the EU and the Organisation of American States, has called on Haiti’s politicians to enter dialogue over the crisis, lamenting the loss of life and damage caused by the protests.

The US State Department expressed concern for its personnel in the country.

“The safety and security of our personnel and their families is our top priority. We are monitoring the security situation in real time, 24 hours a day, seven days a week,” a spokesperson said, declining to discuss any potential security measures.

“We are prepared to do the things we need to do to make sure we keep our people safe.”

The Haitian administration has remained mute in the face of rising unrest over the past five days, with only Eddy Jackson Alexis, the secretary of state for communication, issuing a brief statement on Twitter. — AFP