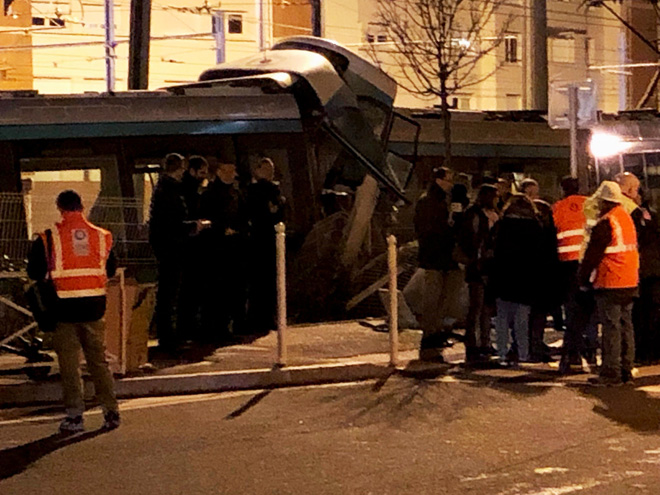 Emergency personnel gather at the scene of a collision between two trams at Issy-les-Moulineaux, south-west of Paris. — AFP photo

NANTERRE, France: French rail authorities said Tuesday they were investigating the cause of a rare tram collision in a Paris suburb which injured 12 people, one of them seriously.

The collision took place late Monday in the Issy-les-Moulineaux suburb southwest of the capital just after 9.00pm.

“Two tram carriages collided with passengers on board,” a spokesman for the RATP Paris rail operator said.

“The one in front was stopped, and the other crashed into it from behind,” causing the first tram to derail.

“One victim is in serious condition, and 11 others have minor injuries,” a spokesperson for the fire department said, adding that nine of the victims had been brought to local hospitals.

Traffic was ‘entirely cut off’ during the night, and bus services were put in place as repair work was carried out at the site of the crash.

RATP chief executive Catherine Guillouard visited the scene overnight, saying “an internal enquiry was immediately triggered in order to shed light on the causes of this accident.”

Traffic is expected to be disrupted for several days as the repair work is carried out, the RATP said.

Accidents are rare on the busy Paris suburban tram network, which was opened two decades ago. — AFP