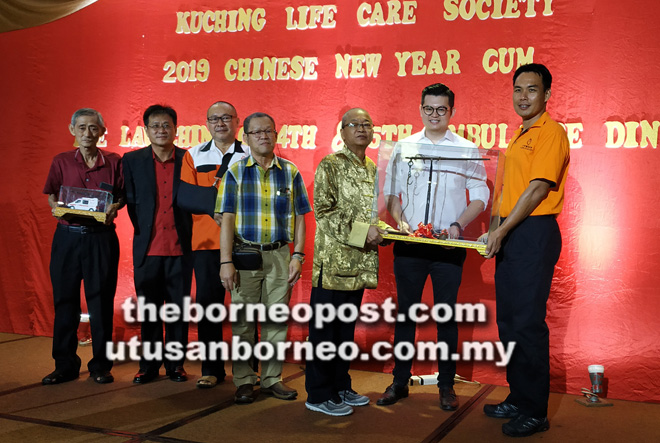 “Our fourth ambulance is donated by Mr Yap, the boss of Son Kuan Trading Sdn Bhd Johor Bahru. He also donated the 3rd ambulance in 2016 and Madam Ting Su Hung from Sibu gave us the 5th ambulance,” said Hung when met at the event.

He is very grateful and appreciates the contribution and support since the society was founded in 1996. Aside from that, the society’s hospice fund has also grown to RM8 million since the fund raising started in 2011, but is still short of RM2 million.

He said the 1-acre land for the hospice located in Batu Kawa here was given by the Sarawak government. Once built, the 3-storey hospice building can provide accommodation for 58 terminally ill patients.

Meanwhile, Bandar Kuching MP Dr Kelvin Yii who was present at the function, said that the ambulance donation was good news for the society which will have two new ambulances soon.

He pledged to continue to support and work together for the benefit of the society and people of Kuching.

“Palliative care, if carried out early like for cancer or late stage cancer will increase the chance of the patients to enjoy quality life. I hope the centre will open soon to benefit the people.”

He also announced that he will be participating in the Go Bald this July as promised.

He said it will be his first time getting his head shaved bald, and urge the people to come and support, so that the organisers can achieve their target.

Among those present were society advisor Sia Yik Tong and chairman John Hii.