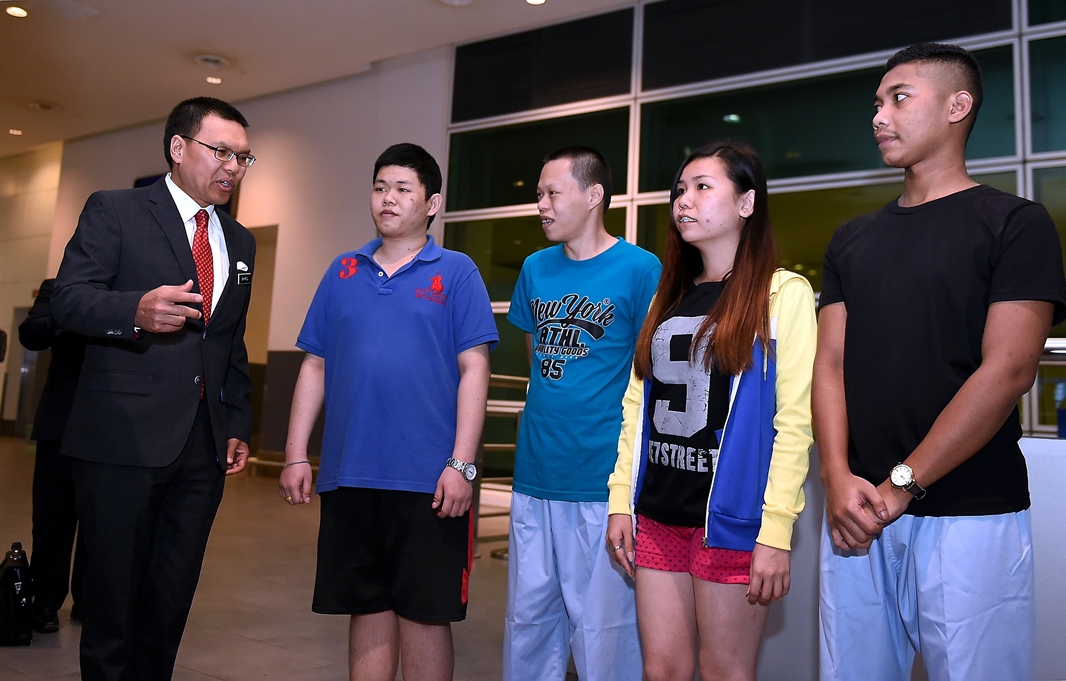 Foreign Affairs Ministry secretary-general Datuk Seri Muhammad Shahrul Ikram Yaakob (left) welcoming back the four of the 47 Malaysians who were released from the Banteay Manchey Provincial Prison near Siem Reap during their arrival at Kuala Lumpur International Aiport 2 (KLIA2) today.

SEPANG: Four Malaysians, who were recently released from a prison in Cambodia, learned a valuable lesson for accepting offers of well-paid jobs abroad via a smartphone app without stopping to think it may be a scam.

Muhamad Daud, Yap and Ng from Kuala Selangor, Selangor and Yeam from Jinjang, Kuala Lumpur, who arrived at Kuala Lumpur International Airport 2 (klia2) here, only with the clothes on their back, were greeted by Foreign Ministry Secretary-General Datuk Seri Muhammad Shahrul Ikram Yaakob.

Yap who was met at klia2 on arrival from Cambodia said he never saw an agent offering jobs in that country because everything was done via the app, WeChat.

After making the payment, Yap said the agent had sent a flight ticket to Cambodia through the WeChat app and he then flew to the country in Oct last year.

Yap said when he got there he was taken to a three-storey bungalow with a swimming pool.

“There I was locked up in the bungalow until I was arrested by the Cambodian authorities on Dec 11,”  he said.

While being confined in the bungalow, he said it never crossed his mind that he would be sold, but was powerless to do anything or even report the matter as his mobile phone had been confiscated.

Yeam said he also accepted a job offer in Cambodia through the WeChat app and he went to the country with his friend Ng without even thinking that they were being deceived.

“But as soon as we arrived, we were shocked when one of the agents took our passports and mobile phones,” he said.

According to Yeam, when there, they did not meet any Malaysians, instead were guarded by individuals whose nationalities were not known but who could speak Chinese.

Muhamad Daud said he was attracted by the high-paying job, also offered via WeChat, as he wanted to increase his family income.

“But what I visioned did not become a reality, instead it became a nightmare for me and hopefully will be a lesson for all job seekers,” he said. – Bernama