Thursday, August 13
You are at:Home»News»Sarawak»Promise on school repairs fulfilled 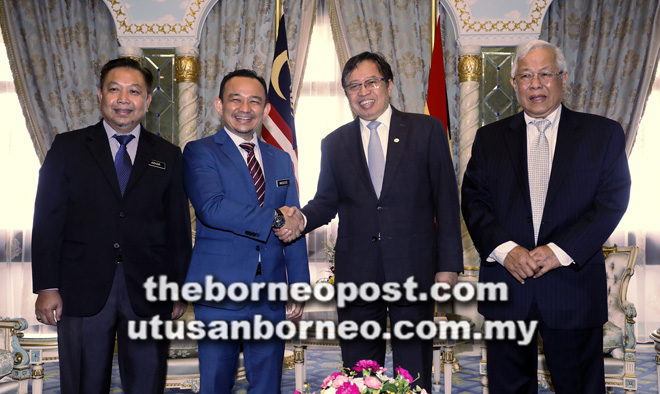 Maszlee (left) shakes hands with Abang Johari during a group photo session. Also with them are Manyin (right) and Azhar. — Photo by Chimon Upon

KUCHING: Repair works for 33 dilapidated schools in Sarawak will commence soon as the RM100 million allocation from the Ministry of Education has been disbursed to the state Public Works Department (JKR).

“On behalf of the Sarawak government, we would like to thank Education Minister Dr Maszlee Malik for the RM100 million which the ministry had promised last year and the allocation is now with JKR Sarawak.

“This allocation is for 33 dilapidated schools in the state and the repair works will start anytime this year,” he told reporters when met after accompanying Maszlee to pay a courtesy call on Chief Minister Datuk Patinggi Abang Johari Tun Openg at his office in Wisma Bapa Malaysia here yesterday.

Last year, Maszlee had pledged that his ministry will be allocating RM100 million for dilapidated and critical schools in Sarawak in line with the Ministry of Education’s efforts to address the issue within two years.

Efforts to find out from JKR Sarawak and State Education Department on which of the 33 dilapidated schools would be repaired under this allocation were futile.

State Education Department director Dr Azhar Ahmad, when contacted, said the list of these schools could not be revealed for the time being.

Meanwhile, Maszlee said among the issues discussed with Abang Johari apart from dilapidated schools were rumours that diesel supply for 21 schools in the state would end after next month.

“The Ministry of Education will continue the supply of diesel to the 21 schools in Sarawak and not as claimed,” he assured.

He also disclosed that Abang Johari had agreed that several matters concerning entry to Sarawak via the State Education Department would be made easier by the Sarawak government to encourage more international students to study in Sarawak.

When asked to elaborate on the proposal to make it mandatory for students to complete their national education from Primary 1 to Form 5, Maszlee said this required feedback from all relevant parties as well as thorough review before it could be implemented.

Last month, Deputy Education Minister Teo Nie Ching was quoted as saying that the government is currently reviewing the Education Act 1996 and under this review, parents who fail to send their children to school could face a fine of up to RM5,000 or six months’ imprisonment.

However, Maszlee pointed out that punishment is not the Ministry of Education’s priority.

“Our priority is to provide all Malaysian children with the opportunity to study and receive quality education,” he stressed.