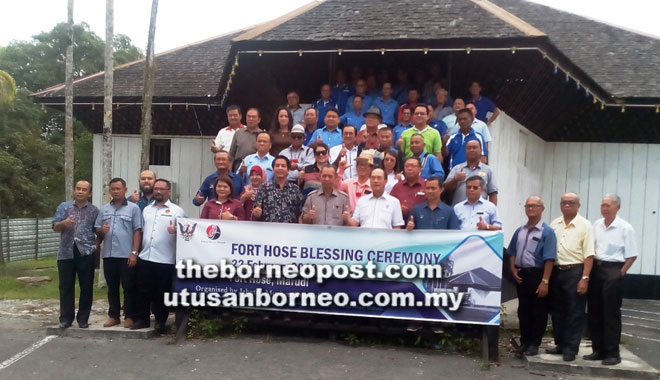 Penguang (front, sixth left) during a photo-call for the ceremony. He is flanked by Gerawat (sixth right) and Dennis.

MARUDI: Fort Hose will undergo an RM2.2 million conservation and renovation project, which is scheduled to be completed in April next year.

During a blessing ceremony for the project yesterday, Assistant Minister of Local Government Datu Dr Penguang Manggil thanked the Museum Department for helping to preserve this icon of Baram.

“The conservation and renovation is under the responsibility of the Museum Department. The ceremony before any of the fort projects is implemented is very important to respect the community sensitivities in Marudi,” he said of the blessing according to Christian rites.

“Development such as the Marudi Waterfront, riverbank retaining wall that is ongoing now, Marudi bridge, and tar-sealed Marudi-Long Linei-Mulu road which will be implemented very soon,” he said.

He pointed out that on March 20, Chief Minister Datuk Patinggi Abang Johari Tun Openg is scheduled to launch the Marudi Waterfront and likely to announce many more development projects.

Fort Hose was built in 1883 during the reign of Rajah Charles Brooke.