Wednesday, September 23
You are at:Home»News»Sarawak»MTUC Sarawak replies to Len Talif 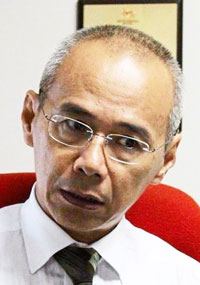 The press statement yesterday said: “We respect (the) views of Datu Len even though we may not agree with some of them.”

With regard to Len’s challenge to take a ride with him from Kuching to Lawas on the coastal highway, Lo said he had ‘driven that road a few times’ from Rambungan/Sampadi to Lawas.

“Would Datu like to see the 16 immigration stamps on my passport?” he asked.

He pointed out that MTUC ‘never’ claimed that the coastal highway project was a waste of money. What he did say, he reiterated, was that ‘it should not be prioritised over the Pan Sarawak trunk road (now Pan Borneo) that run almost parallel with less than 100 kilometres separating them’.

On the subject of roads, the union leader made a request for the installation of street lamps on the Kuching-Bau Road.

“I am quite sure we can divert some lamps from somewhere where roads were so brightly lit that one can play badminton,” he said.

Lo also refuted Len’s observation that ‘MTUC officials do not go to the ground and gather facts’.

He answered, “please let it be known that MTUC officials and workers are all from the ground – working and eking out a living all over Sarawak.”

He recalled that in January 2013 the Labour Department asked for his assistance to diffuse an industrial unrest where about 1,000 local workers were sacked and their jobs taken over by foreign workers by companies building factories in Samalaju.

The 1,000 Sanmina SCI employees, he added, ‘lost their jobs overnight and were escorted out of their workplace by security guards with dogs’.

It was MTUC who assisted them to obtain additional compensation, Lo said.

Lo admitted that the assistant minister was correct that Sarawak’s 3.8 per cent unemployment rate is considered full employment by World Bank standards.

He countered, however, that it does not address graduate unemployment and underemployment.

He provided examples such as degree holders driving grab cars or employees taking a second job.

The statement also referred to Len’s challenge to MTUC to ask high-tech industry players on the number of high-paying jobs they have provided to Sarawakians.

Lo said ‘we tried (to ask), but the companies do not recognise unions and decline to provide’ (the figures). Instead, he called on Len to ‘please assist us to provide the full figures, since he said the numbers would be contrary to MTUC claims’.

In addition, he also asked for figures on ‘all of jobs created during the past 20 years across all industries and sectors’.

How many of these are decent jobs, Lo asked.

The MTUC Sarawak statement expressed the hope that projects worth RM6 billion on the state’s infrastructure development are not done on the back of ‘foreign labour as the construction industry is notorious for engaging huge number of foreign workers’.

For example, he wondered why there was a need to build Samalaju port when Bintulu port is nearby.

“We should invest in human capital rather than grandiose project like hydrogen buses,” he asked using another example.