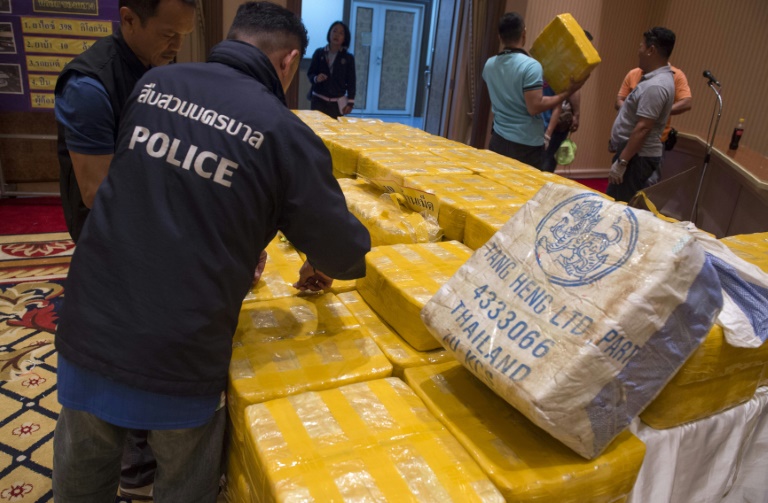 Myanmar is believed to be the world’s biggest producer of crystal meth, as evidenced by this $45 million haul seized in Bangkok in 2018. – AFP file photo

Myanmar authorities seized more than 10 million meth pills worth $13.3 million over the weekend, police said Monday, another massive haul in a country widely believed to be the world’s largest methamphetamine producer.

High-grade crystal meth — or ‘ice’ — is smuggled out of Myanmar via sophisticated networks to lucrative developed markets as far away as Japan, South Korea and Australia.

Lower-quality pills, cut with caffeine and known in the region as “yaba” or “crazy medicine”, are pumped out to feed the voracious domestic market as well as large drug-addicted communities in nearby Thailand and Bangladesh.

Two different busts took place in the west of the country at the weekend, state-run media said Monday, one in Magway region and one in Maungdaw in Rakhine state.

“It’s the biggest drugs seizure this year in the country and the biggest ever in Maungdaw region in Rakhine State,” police colonel Win Ko Ko told AFP.

The pills were likely destined for Bangladesh, where they have become an easy source of income for the Rohingya Muslim refugees who have poured across the border since a 2017 military crackdown.

Most of the drug production, however, takes place on the other side of Myanmar, in conflict-ridden eastern Shan state.

Much of the state lies outside of central control with a complex web of rebel ethnic armed groups and militias wielding power and linking up with trafficking networks.

Opium farming is also rife, and Myanmar remains the world’s second largest producer of the drug after Afghanistan.

The poppy-covered hills also provide an ideal location for illicit meth labs, with a largely unchecked supply of precursor chemicals flooding-in from China.

Accurate production figures are impossible to obtain, but experts say that large seizures have had no effect on drug prices — suggesting they are only a small proportion of the total. – AFP