Tuesday, April 13
You are at:Home»World»Britain’s May seeks ‘one more push’ from EU on Brexit 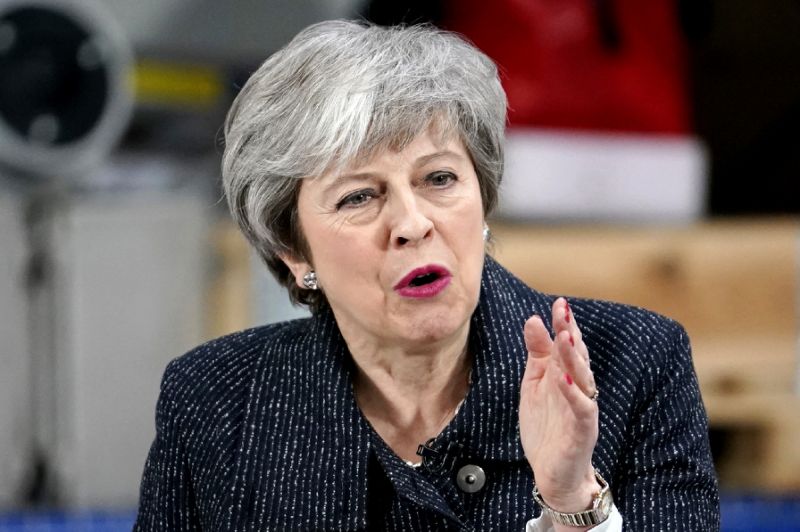 British Prime Minister Theresa May still lacks the assurances she is seeking to get her Brexit deal through parliament. AFP Photo

GRIMSBY: Prime Minister Theresa May on Friday urged the EU to make “one more push” to get the Brexit deal over the line in time for Britain’s exit from the bloc in three weeks.

The beleaguered leader’s request for an additional concession from Brussels comes with Britain on the brink of crashing out of the European Union after 46 years with very few arrangements in place.

The British parliament is set to vote Tuesday on May’s existing deal with Brussels after rejecting it by a historic margin in January.

But last-gasp negotiations between UK and EU envoys ended in acrimony on Wednesday and May still lacks the assurances she has been after to get her deal approved by MPs.

May told an audience of factory workers in the North Sea fishing port of Grimsby that Britain may never split off from the other 27 nations if Brussels failed to help her now.

The deal “needs just one more push to address the final, specific concerns of our parliament,” May said.

“Because if MPs reject the deal, nothing is certain. It would be at a moment of crisis.”

The deal is stuck on the so-called “backstop” solution that London and Brussels devised to keep the Irish border open with the UK’s Northern Ireland — a province with a past history of sectarian violence.

Some lawmakers in May’s Conservative Party fear that the arrangement will keep Britain trapped long-term in a customs union with the EU.

May wants a written guarantee from Brussels that this will not be the case. EU officials say the backstop must stay in place until a new trade deal is signed — no matter how long that takes.

EU ambassadors met in Brussels on Friday to discuss how they might proceed ahead of next week’s crucial events in London, with the March 29 deadline looming large.

“The EU stands united, we are not interested in the blame game,” EU chief negotiator Michel Barnier said after the talks.

“We are interested in the result… and we are still working.”

But Dutch Prime Minister Mark Rutte took a tougher line, saying May was seeking “impossible” concessions from the EU.

May has scheduled a potential series of votes that could include one on Thursday asking the EU to grant London an exit day delay.

But May said such a deferral would create “continuing uncertainty” that ruins the business climate and potentially leads to Brexit never happening.

“If we go down that road, we might never leave the EU at all,” she said.

“That would be a political failure. It would let down the more than 17 million people who voted to leave the EU and do profound damage to their faith in our democracy.”

Grimsby ran the world’s largest fishing fleet and prospered before Britain joined the European communities and signed up to the Common Fisheries Policy in 1970s.

Some 70 percent in the surrounding area voted in the 2016 referendum in favour of Britain leaving the EU.

May’s decision to visit the region highlights her government’s efforts to remind Conservative MPs of the backlash they might face from voters if they failed to deliver Brexit on time.

Top members of May’s team have spent recent days delivering stark warnings about Britain never leaving and the complications this would create for the EU.

“History will judge both sides very badly if we get this wrong,” Foreign Secretary Jeremy Hunt told BBC radio.

“We know what it would take to get a deal through the House of Commons, and it is for a significant change that would allow the (UK government) to say we couldn’t be trapped in the customs union for ever,” he said.

“That’s not an unreasonable ask.”

A top member of the Conservative Party’s anti-EU lobby also warned that there would be no deal done by the deadline without a substantive backstop change.

“If it is some very minor, meaningless tweak then of course we will vote against it,” MP Mark Francois said. – AFP