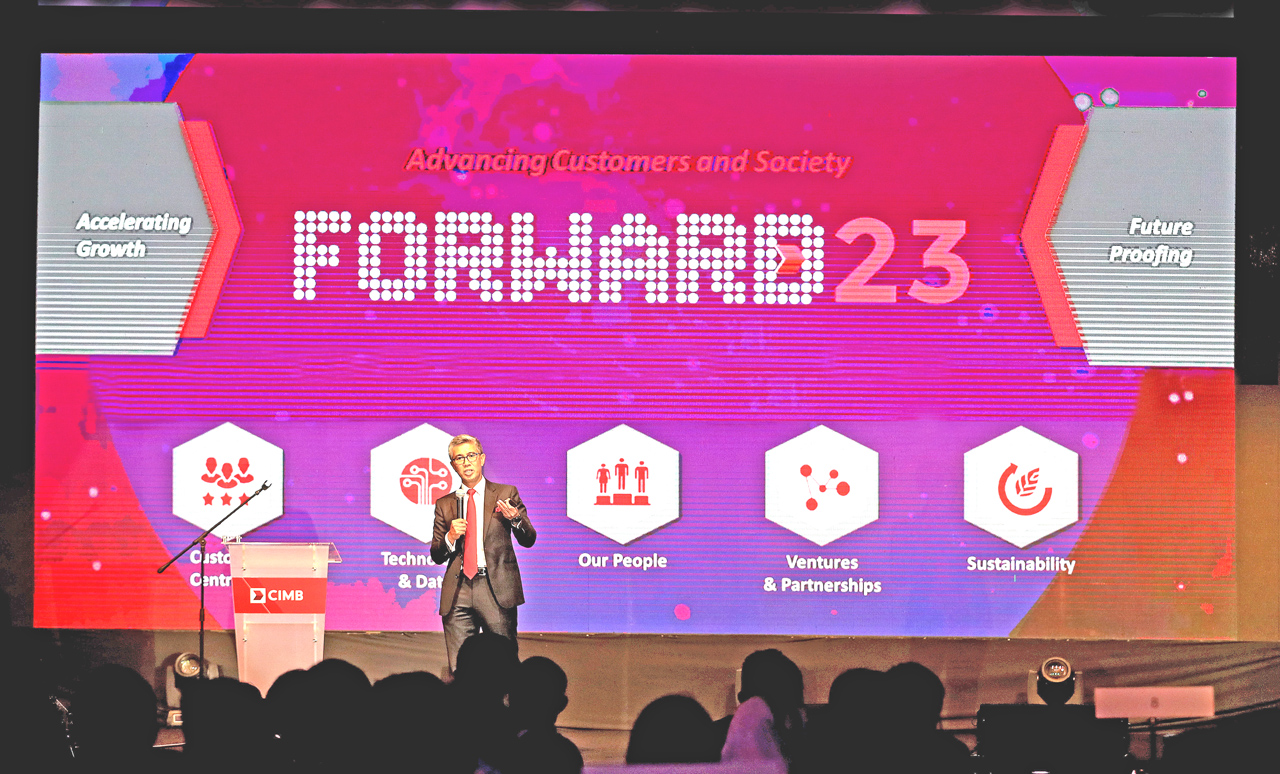 Zafrul Aziz is seen unveiling the ‘Forward23’ plan, the group’s next five-year blueprint to accelerate growth and future-proof its business.

In a statement, it said, on the back of strong foundations following the success of T18, the group has embarked on its next transformational growth phase under Forward23, poised to capture the opportunities of the evolving banking landscape.

To reflect its strong commitment towards value creation for its stakeholders, CIMB said the new vision statement – advancing customers and society – aims to sharpen its focus on customers, innovation and sustainable practices.

In line with the Forward23 blueprint, Asean will remain as the Group’s geographical focus given the strong network and footprint that the Group has built over the last decade. The group has also identified five strategic pivots under Forward23 namely, customer-centricity, technology and data, people, ventures and partnerships, and sustainability.

CIMB Group chief executive officer Tengku Datuk Seri Zafrul Aziz commented, “As an Asean MNC in a highly competitive industry, we need to be both foundationally strong and agile to compete effectively in the fast-evolving banking landscape.

“Forward23 is our plan to proactively disrupt ourselves in order to drive transformational growth, by building new or enhancing existing capabilities. CIMB’s strong execution capability was proven by the success of T18 and I am confident that #teamCIMB will once again be able to deliver on our Forward23 targets, and continuously generate sustainable value for our stakeholders.”

CIMB has outlined three financial targets to be achieved by 2023. These targets include an return on equity (ROE) of more than 12 per cent, a CET1 ratio of over 13 per cent, and a cost to income ratio of below 45 per cent.

Meanwhile, on the T18 plan, CIMB announced in February 2019 that it had met its T18 targets and attributed that success to its strong cohesive group-wide execution.

Additionally, it said, 61 per cent of its PBT was contributed by the Consumer and Commercial banking businesses.

During the T18 journey, CIMB said it successfully established its presence in all 10 Asean countries by completing its expansion to Vietnam in 2016, and by establishing the first ‘All-Digital Bank’ in the Philippines in 2018.