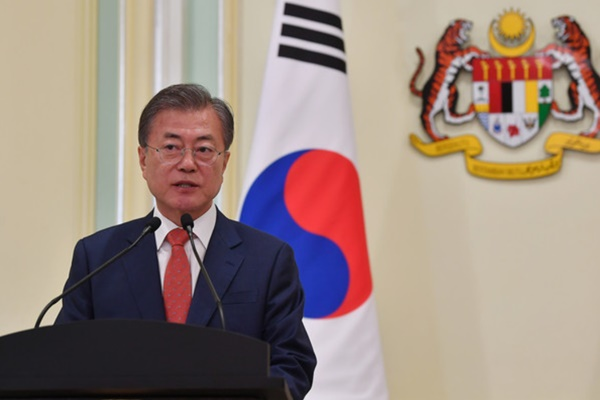 He said Malaysia’s Prime Minister Tun Dr Mahathir Mohamad had been laying the foundation for bilateral cooperation through the Look East Policy, which was launched under Dr Mahathir’s leadership in the 1980s.

“My government is also actively implementing the New Southern Policy (which was launched in 2017) known to further elevate and develop our relationship to ASEAN countries including Malaysia,” he said in a joint press conference with Dr Mahathir at Perdana Putra here today after both leaders held talks earlier.

The New Southern Policy aims to elevate the relations between Korea and Asean including Malaysia in the three pillars of People, Prosperity and Peace, and as well as to a heightened level equivalent to the relations with the four powers.

As a family member of ASEAN, President Moon said Malaysia had achieved a remarkable economic developments and also playing a leading role in fostering peace and prosperity in the South East Asian region.

“I believe all this is possible, thanks to the vision of an outstanding leader (Dr Mahathir) and presence of hard-working people. I, once again convey my fine regards to Prime Minister Mahathir for steering Malaysia towards national development while preserving the value of Asia for a long period.

Moon said he was delighted to be the first Korean President to visit Malaysia after nine years.

The last state visit by a president of South Korea to Malaysia was by President Lee Myung-bak, on Dec 9 and 10, 2010, for the commemoration of the 50th anniversary of the establishment of diplomatic relations between Malaysia and South Korea.

He said South Korea and Malaysia had agreed to further invigorate the people-to-people exchanges between the two countries, and ‘we take note of the steady increase whereby the number of visits between our two nations was 1 million per year.

President Moon said both countries also further agreed to cultivate friendship of people by hosting cultural events to celebrate the 60th anniversary of the establishment of diplomatic relations between Malaysia and the Republic of Korea in 2020.

“We also discussed and agreed to establish institutional framework to expand bilateral trade and investment by working towards bilateral agreements.

“We want a swift proceeding with relevant procedures starting from a joint feasibility study. I hope we will be able to declare the conclusion of negotiations on the occasion of the ASEAN-Korea Commemorative Summit,” he said.

President Moon and Dr Mahathir also agreed to actively explore cooperation in advanced industries including information and technology (IT), smart manufacturing, future cars, health and medical fields in order to seek a joint response to the era of the fourth Industrial Revolution.

“We share our great appreciation for the smart city pilot project that will be launched in Kota Kinabalu, Sabah. We also agreed to extend our cooperation regarding intelligence transport system, and roads to global halal market. And for this (halal market) purpose, we have agreed to expand cross certification between respective agencies,” he said.

“We propose a new vision to create the next 100 years and establish strategic road map for regional peace, and cooperation as well as prosperity through this summit,” he said.

In addition, President Moon hoped that today’s bilateral meeting would mark an important mile stone in South Korea and Malaysia’s efforts to develop a friendly and cooperative ties in a more successful manner.

“I would like to express my gratitude for the warm hospitality from the Malaysian government and hope to return the favour when Prime Minister Dr Mahathir visits South Korea at the end of this year,” he said. – Bernama