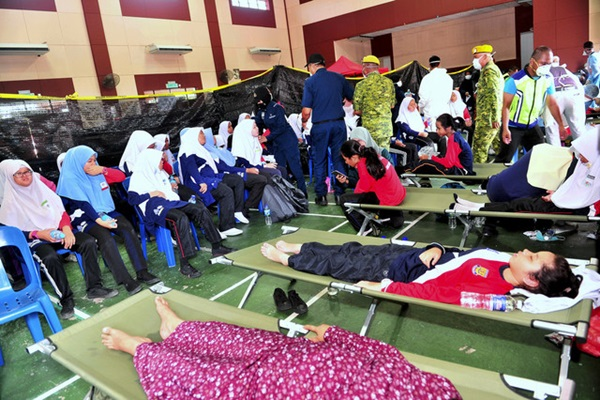 Students waiting to be treated due to the pollution. Bernama Photo

KUALA LUMPUR: The Dewan Rakyat is to debate today an emergency motion on the pollution crisis triggered by the dumping of chemical waste in a river in Pasir Gudang, Johor.

When tabling the motion, Hassan urged the government to declare an emergency in Pasir Gudang due to what he said is the bad air and water pollution in the area following the dumping of chemical waste in Sungai Kim Kim.

“The hundreds of thousands of residents in Pasir Gudang are now exposed to the dangerous toxic chemical pollution that began with the dumping of chemical material in Sungai Kim Kim that flows over 1.5 kilometres. The fumes from the toxic chemical are in the air and are being spread all over by the wind.

“This has made the residents to panic and worry. The Dewan Rakyat must debate this toxic chemical pollution crisis in the interests of the residents of Pasir Gudang to ensure they are assured of their health,” said Hassan.

From 7 to 8 pm yesterday, 947 people, many of whom were students, had been treated in hospital for inhalation of the toxic fumes, nine of them in intensive care.

Yesterday, the Education Ministry ordered the indefinite closure of all the 111 schools in Pasir Gudang. – Bernama

Previous ArticleSenior citizen denies abused by children, claims injury due to fall
Next Article Situation in Pasir Gudang under control