Wednesday, October 20
You are at:Home»News»Nation»Update on chronology of chemical pollution in Sungai Kim Kim, Pasir Gudang 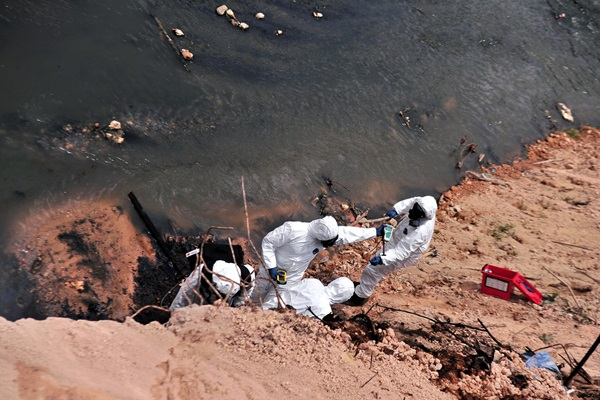 Authorities working to clean up the pollutants in the area. Bernama Photo

KUALA LUMPUR: The following is a chronology of the latest development in the chemical pollution which affected more than 2,000 people, and caused 111 schools in Pasir Gudang to be ordered closed, believed to have been caused by toxic waste dumped into Sungai Kim Kim on March 7.

* 13 Mac: All 111 schools in the Pasir Gudang district were ordered closed

– 947 were treated, with nine in the Intensive Care Unit (ICU) of the Sultan Ismail Hospital (HSI).

– The state government approved an emergency allocation of RM6.4 million as instant aid for cleaning works and to be given to the victims and their families as well as security staff exposed to the dangers of the pollution.

– 92 kindergartens and nurseries in the affected area were ordered closed to prevent an increase in the number of victims.

– 51 police reports were received on the chemical pollution case.

– Sultan Ibrahim Sultan Iskandar consented to a contribution of RM1 million for the operations to rescue, treat and prevent chemical pollution in Pasir Gudang.

– The results of the analysis of the sample taken from Sungai Kim Kim by the Department of Environment showed that all contained the organic solvents Benzene, Toulene, Xylene, Ethylbenzene and D-Limonene.

– The Ministry of Energy, Science, Technology, Environment and Climate Change obtained the help of the armed forces and Petronas to send their resources in the form of machinery, equipment and expertise to help in the crisis.

– Some residents in Pasir Gudang took the initiative of temporarily vacating their homes.

– Dewan Rakyat debated an emergency resolution on the issue of chemical pollution in Pasir Gudang at 4.30 p.m.

– The Chemical Biological, Radiological and Nuclear (CBRN) Survey Team and the Casualty Evacuation Unit of the Malaysian Armed Forces were mobilised to the affected area to detect, determine and neutralise the chemical waste.

– Dr Mahathir stressed that there was no need to declare a stage of emergency as the situation was still under control. – Bernama