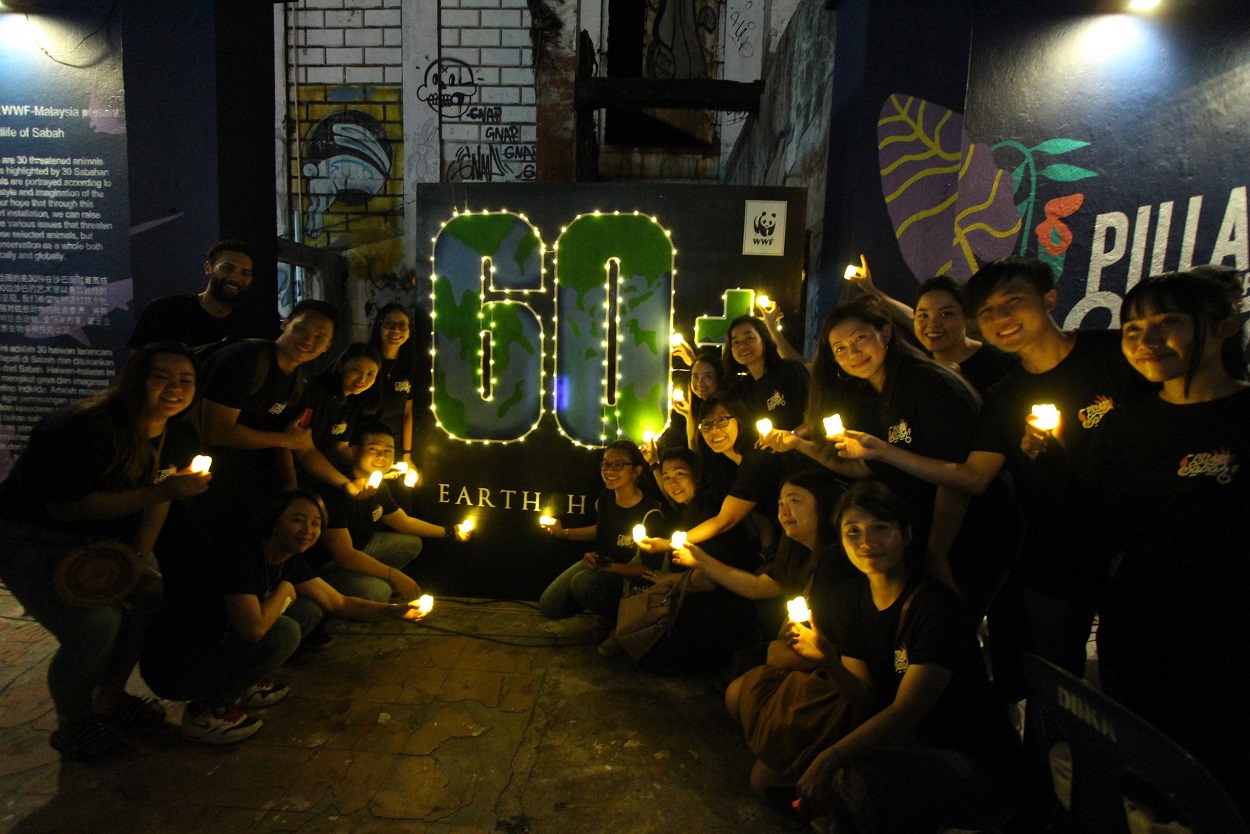 The artists with battery operated tea lights in front of the Earth Hour signage during the launch of Pillars of Sabah 2.0.

KOTA KINABALU: The newly revamped Pillars of Sabah 2.0 was launched on Saturday night in conjunction with Earth Hour 2019.

Tourism, Culture and Environment Minister Datuk Christina Liew in her speech at the launching ceremony, said that climate change remains a big challenge for all, but another urgent threat, the loss of nature now demands attention.

“These two combined threats mean we must act and now. This year, we are celebrating Earth Hour in a very special way. In conjunction with Earth Hour, WWF-Malaysia has teamed up with the artists behind the Pillars of Sabah project to beautify these pillars with the wildlife of Sabah,” she said.

Her speech, which was delivered by Tourism, Culture and Environment Ministry’s permanent secretary, William Baya, lamented that many of the our wildlife are fast disappearing in the wild due to human development, poaching and illegal wildlife trade.

“If we don’t do something to tackle this problem quickly, soon we will lose our wildlife entirely. The first step towards finding lasting solution is to be aware of the problem at hand and this is where the Pillars of Sabah can play an important role,” she said.

“These pillars are painted with 30 different endangered wildlife whether in the forest or in the sea. It is my hope that the pillars will be a platform of education for all who come here to admire the art,” she added.

Liew commended the efforts put in by the Pillars of Sabah team and the 30 artists who spent over two weeks to paint these pillars, and expressed her gratitude to them for beautifying part of Kota Kinabalu’s historical landmark.

“I also thank WWF-Malaysia for their effort in ensuring that important wildlife are highlighted on these pillars,” she said.

The ministry, she said, is excited to work with Dr. Robecca Jumin, the newly appointed Head of Conservation in Sabah for WWF-Malaysia.

“I hope that when you admire these pillars, you learn more about the plight of our wildlife. I hope that you will be inspired to take action to help conserve the animals living in our shores and our jungles. The conservation of our wildlife is a shared responsibility. We each have a part to play in helping nature thrive. The artists behind these pillars have taken the first step. Let’s all follow suit,” Liew said.

After the launching ceremony, lights at the venue were turned off for one hour as Earth Hour was observed.