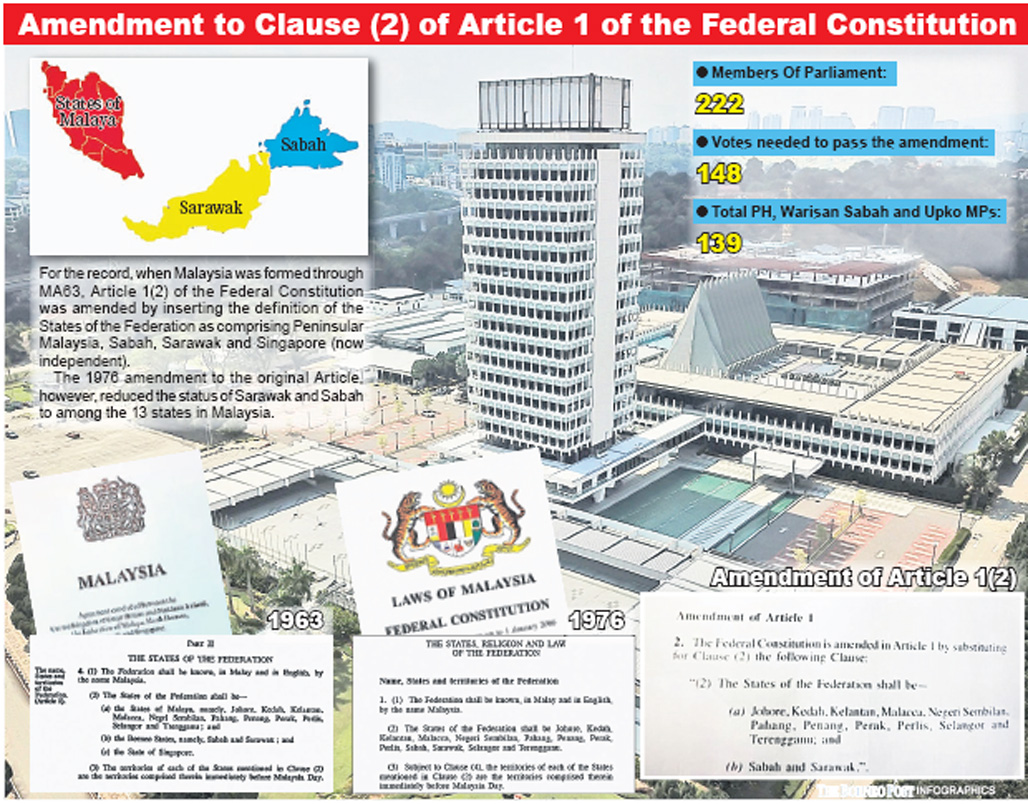 KUCHING: All Gabungan Parti Sarawak (GPS) MPs objected to the Bill seeking the passing of an Act cited as the Constitution (Amendment) Act 2019 after its first reading in Parliament yesterday.

Minister in the Prime Minister’s Department Datuk Liew Vui Keong delivered the first reading of the Bill while the second and third reading by Prime Minister Tun Dr Mahathir Mohamad is expected on April 9.

Under the Bill, the Federal Constitution will be amended in Article 1 by constituting for Clause (2) as follows:

“(2) The States of the Federation shall be –

At present, Article 1(2) of the Federal Constitution reads: “The States of the Federation shall be Johore, Kedah, Kelantan, Malacca, Negeri Sembilan, Pahang, Penang, Perak, Perlis, Sabah, Sarawak, Selangor and Terengganu.”

The Bill pointed out: “This amendment is made in line with the spirit of the Malaysia Agreement concluded in 1963.”

“This amendment does not, in any way, alter the functions of the Federal and State Governments under the concept of federalism,”

The first reading concluded with: “This Bill will involve the government in extra financial expenditure the amount of which cannot at present be ascertained.”

This Act is expected to come into operation on a date to be appointed by the Yang di-Pertuan Agong by notification in the Gazette.

The amendment Bill to Article 1(2) of the Federal Constitution was objected by all GPS MPs.

Prior to the objection, Kota Marudu MP Datuk Seri Maximus Ongkili was the first who rose to his feet, attempting to stop the Pakatan Harapan (PH) government from tabling the Bill.

The Parti Bersatu Sabah lawmaker said this was a significant amendment, which the PH government ought to discuss extensively with the governments of Sabah and Sarawak before seeking to pass the Bill in Parliament.

Maximus also requested the Parliament to set up a Select Committee to conduct an in-depth study into the issue.

His motion was supported by GPS MPs and MPs from Umno and PAS who all requested the government of the day to retract the Bill.

Given the present total number of MPs of 222, at least 148 of them have to vote for the Bill in order to see it pass as an Act.

However, even if all the PH MPs as well as MPs from Parti Warisan Sabah and United Pasakmomogun Kadazandusun Murut Organisation (Upko) support the Bill, there will be only 139 votes.

Hence, the government of the day will require at least another nine votes for the Bill to get through.

Upon hearing the objection, Speaker Datuk Mohamad Ariff Md Yusof ruled that MPs who objected to the Bill could voice their opinions during the second reading next Tuesday.

A legal expert observed that the much-awaited amendment Bill will merely revert to the Original Article of Constitution as at Malaysia Day with no indications on finance, rights to oil and gas and territorial waters.

In an immediate response, he commented that the amendment had no positive impact on the eroded rights and powers of Sarawak and Sabah.

“No big deal unless all other issues of finance, rights to oil and gas and territorial waters are resolved.

“It is just reverting to Original Article of Constitution as at Malaysia Day. No other positive impact on our eroded rights and powers,” said the legal expert.

This amendment is in line with the PH government fulfilling its election promise that the spirit and principle of Malaysia Agreement 1963 (MA63) should be upheld and observed so as to restore the status and rights of Sabah and Sarawak.

Prior to the tabling of the Bill, Dr Mahathir had made it clear that the amendment will adhere to the context of MA63 and require two-thirds majority in Parliament in order to be passed.