Thursday, February 2
You are at:Home»News»Sabah»13 suspected militants arrested in Semporna
For the freshest news, join The Borneo Post's Telegram Channel and The Borneo Post on Newswav. 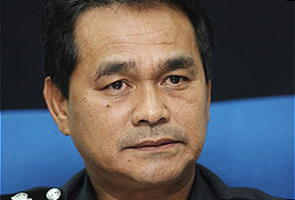 KOTA KINABALU: Thirteen people have been arrested by police for alleged involvement in militant activities in Semporna.

Sabah Police Commissioner Datuk Omar Mammah said the suspects, comprising 12 Filipinos and one local, were arrested by Sabah Police Special Branch and Vat 69 Commandos during several operations in Semporna between January and March this year.

“The suspects were believed involved with the Abu Sayyaf, Maute or Royal Sulu Force (RSF) militants, while some were providing shelter for the militants who are hiding in Sabah,” he said at a press conference at the police monthly gathering at the Sabah Police Headquarters in Kepayan yesterday.

Omar said the suspects were detained to be investigated under the Security Offences (Special Measures) Act 2012 as well as under the Penal Code.

Meanwhile, Omar said statistic for the first three months of this year showed an increase of 9.19 percent of crime cases as compared to the same period of last year.

Property cases, such as theft or burglary, increased by 9.35 percent while hard crime rose to 7.69percent, said Omar.

“For solved cases, the Sabah Police Contingent (IPK) is ranked at number 10 out of 14 police contingents in Malaysia with 48.94 percent of solved cases between January and March this year,” he said.

For narcotic cases between January and March this year,he said the Sabah police had recorded 232 cases of drug smuggling with 304 arrests made as compared to 177 cases with 222 arrests made during the same period last year.

“This shows an increase of 31.1 percent of drug smuggling activities and 36.9 percent of arrests made,” said Omar.

Omar added a total of 3,103 people were also detained for drug abuse in the first three months of this year as compared to 2,250 people detained for a similar offence during the same period last year, an increase of 33.9 percent.

The Dangerous Drug (Special Preventive Measures) Act 1985 also saw in increase of 71.4 percent, when 12 people were arrested under the act in the first three months of this year as compared to only seven arrests made during the same period last year.

Omar said numerous drugs had also been confiscated by the police during the three months period of this year with syabu at the top of the list with 7,087.74 grams seized.

Commercial crime cases have also increased this year with losses close to RM29 million, while RM18.5 million of losses were recorded in the first three months of last year.