Sunday, October 2
You are at:Home»Features»First Catholic columbarium in Sarawak 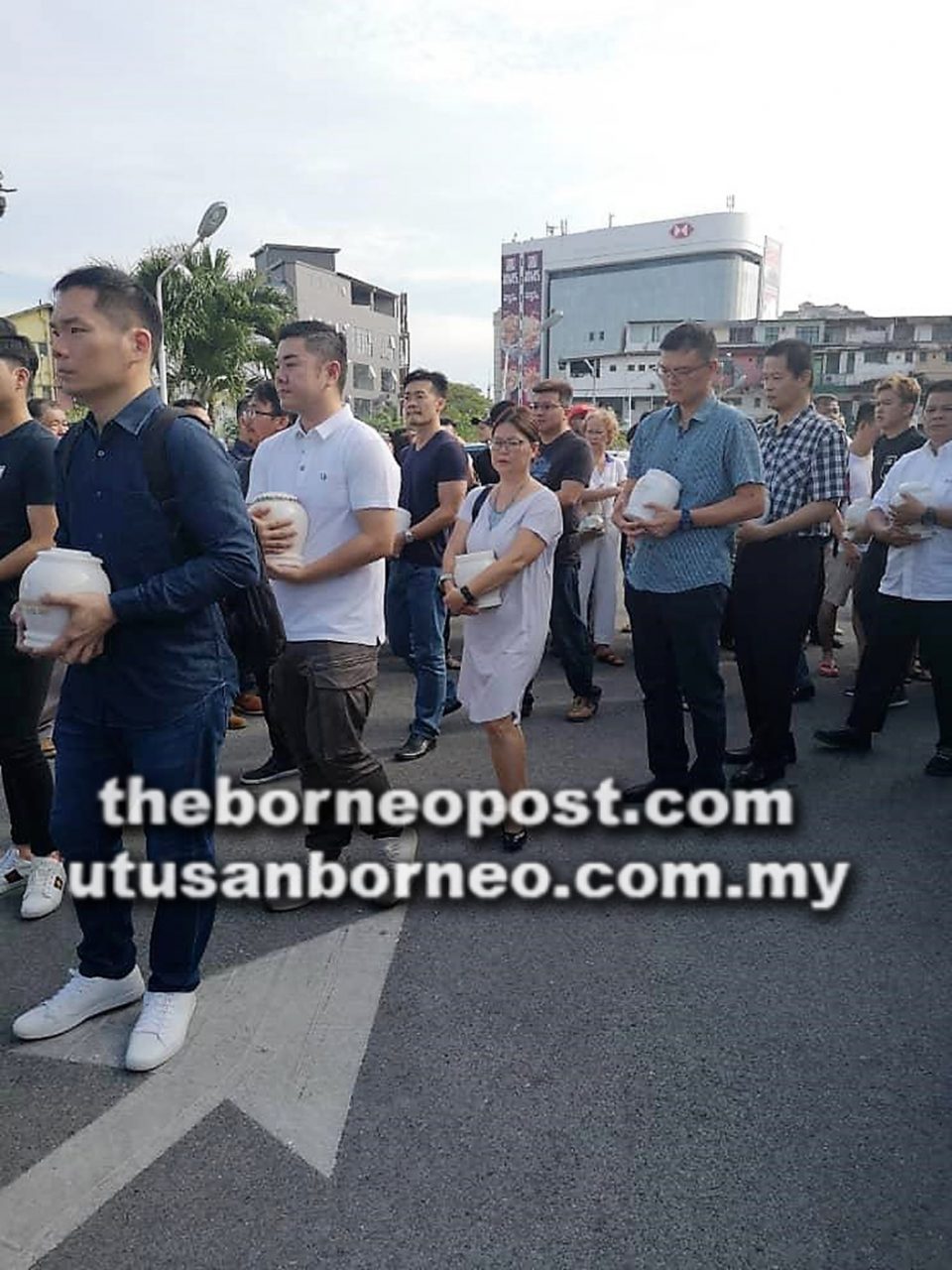 Family members carry the ashes of their departed loved ones into the columbarium for interment.

THE construction of the first Roman Catholic columbarium in Sarawak started in December 2017 with the blessing and ground-breaking ceremony performed by Archbishop of the Roman Catholic Archdiocese of Kuching Simon Poh at St Peter’s Church, Jalan Padungan.

The columbarium was completed in January. It was blessed and declared open by Poh on March 24 after Sunday mass. 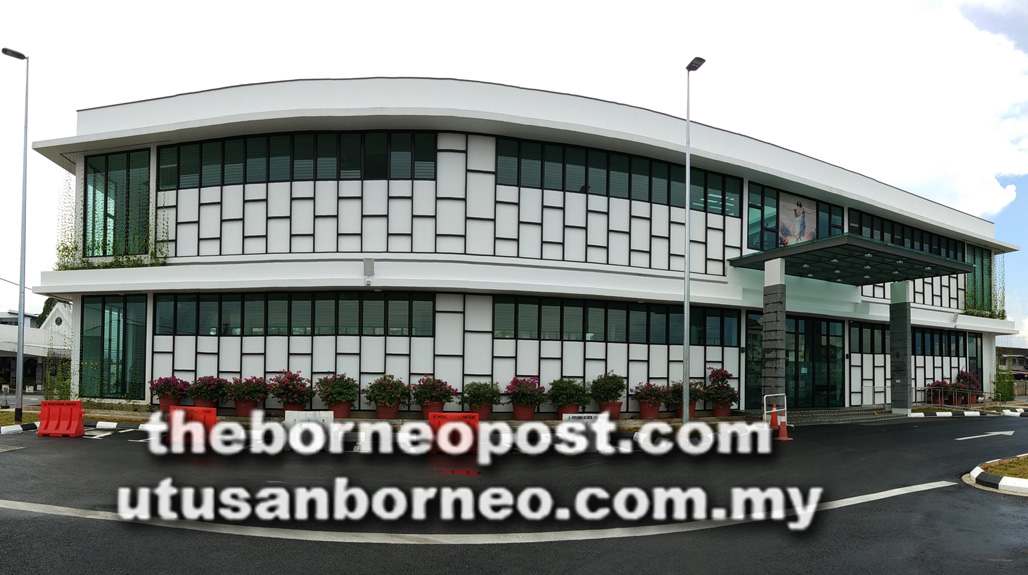 Outside view of the columbarium.

After the ceremony, the congregation, carrying the ashes of their loved ones in cinerary urns, entered the columbarium to intern the urns in the niches they had booked. Before this, the urns were kept in a temporary holding place behind the church.

According to Revd Vincent Chin, rector of St Peter’s Church, a columbarium is a sacred place for keeping the cremated remains of the departed.

This ensures the departed are not excluded from the prayers of their families or the Christian community at large. In this way, the faithful departed will be remembered and their remains given the rightful respect. Moreover, it prevents any unfitting or superstitious practices.

Inside the St Peter’s columbarium are rows of niches resembling little cabinets where the ashes are in cinerary urns. 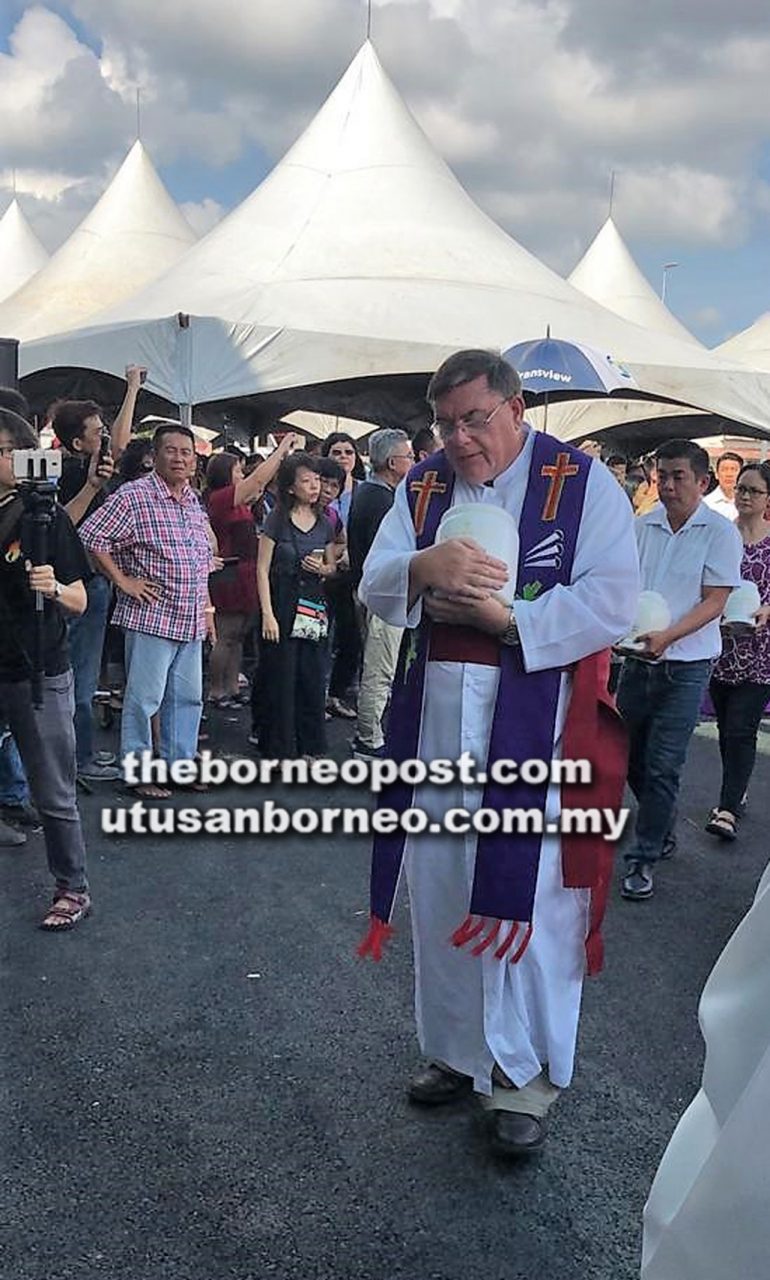 The front cover of the niche is embossed with a photograph and inscribed with a brief description of the deceased. Each cover may have a small cranny at the side for placing some artificial flowers (fresh flowers are not allowed in this columbarium).

The word columbarium derives from an Italian word columba meaning “the dwelling place of a dove”.

One reason for building a columbarium in the parish compound is to restore an old church tradition, which is to have a cemetery next to it so that the remains of the departed can be kept close to the loved ones.

As an alternative to having a cemetery near a church, a columbarium can be built within the church compound.

With a cemetery within a stone’s throw, it’s convenient for worshippers to visit the burial site and pray for their departed loved ones. It is also to show there is nothing to fear about the dead.

Another reason is that the local church, up till now, does not have a place for Catholics opting for cremation and ashes have been interred at a Buddhist columbarium or temple.

Chin said burial plots in Kuching are becoming scarce, especially near a church, resulting in Catholic cemeteries having to be located further and further from the city – the nearest being somewhere at Mile 13.

He believes in such a situation, people would probably go to the cemetery twice a year – during the anniversary month of the departed and All Souls’ Day. 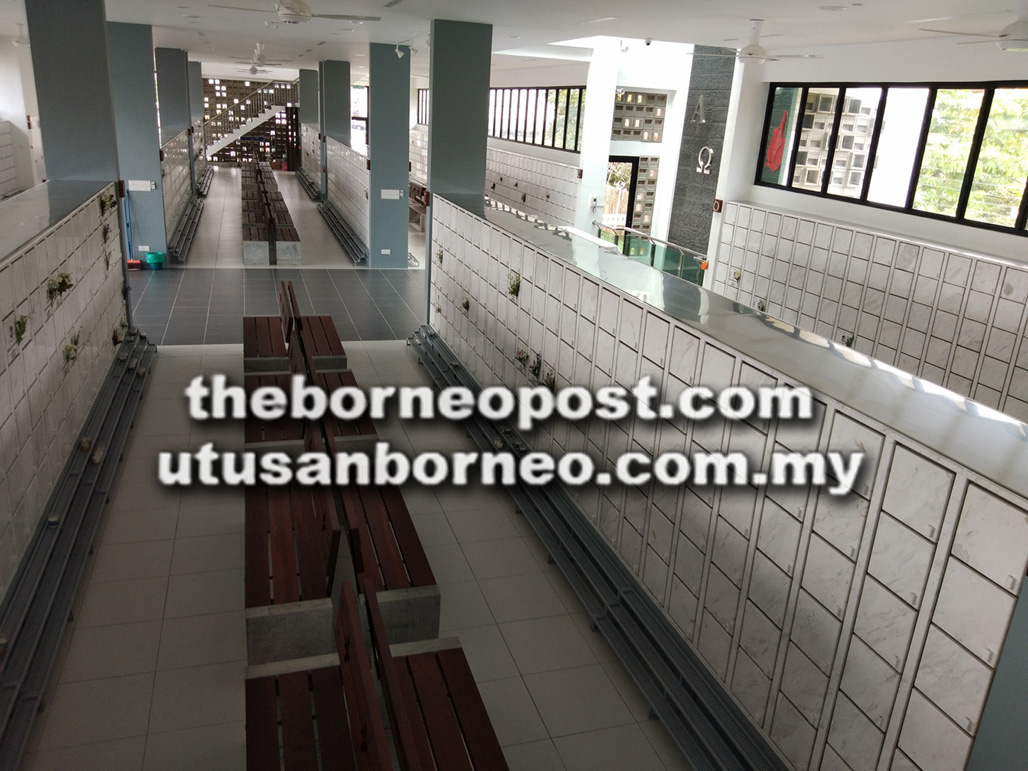 The interior of the columbarium.

“However, if the ashes are kept in a columbarium, churchgoers will, in a sense, be closer to their departed loved ones whenever church activities are held.

“Even if family members are not present, masses will be offered to the departed during All Souls’ Day (every Friday in November) and on the anniversary month of their demise. So parishioners need not worry that no one would be praying for their departed loved ones.” 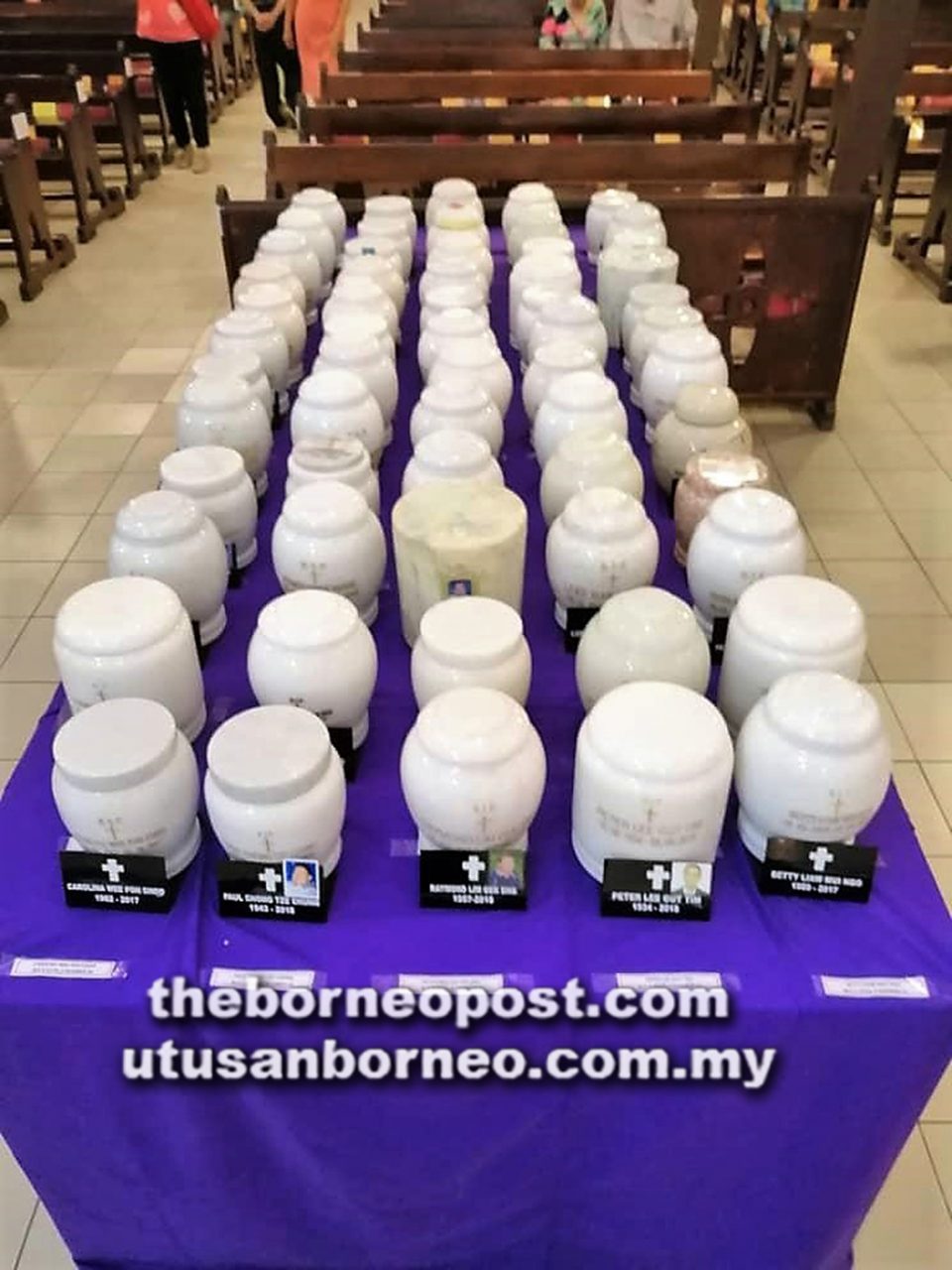 These urns were moved from the temporary holding place to the Church for interment.

“The instruction says in circumstances when cremation is chosen because of sanitary, economic or social considerations, this choice must never violate the explicitly-stated or the reasonably inferable wishes of the deceased faithful.

“Thus cremation, in and of itself, objectively negates neither the Christian doctrine of the soul’s immortality nor that of the resurrection of the body.”

Chin said the Church is more concerned about the proper handling of cremains because in the past, there were no rulings or guidelines, so people simply threw the ashes away.

“The document highlights three points – first, the ashes must not be scattered anywhere; secondly, there should be no sub-dividing of cremains; and thirdly, the cremains are not allowed to be kept at home.” 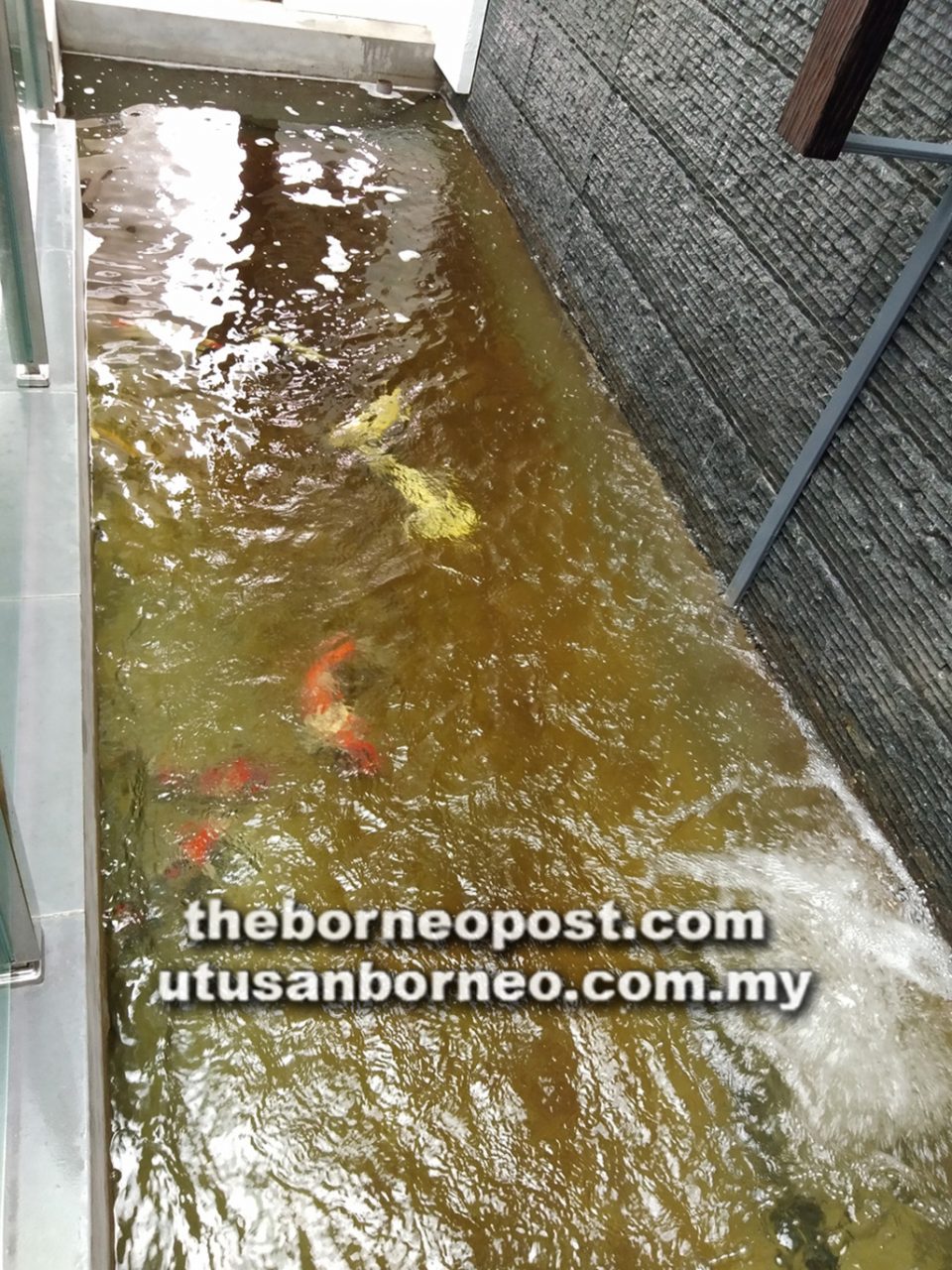 A koi pond inside the columbarium.

According to him, scattering the ashes into the natural environment is a different religious practice which believes that when we die, we enter into nothingness, so the ashes are no longer important and families can return the ashes to nature by scattering them in open fields, rivers, and seas.

On why the ashes could not be kept at home, Chin said, “Out of respect for you, your children would want to keep the cinerary urns in the proper place.”

The two-storey columbarium of St Peter’s Church can accommodate up to 5,000 urns with two types of niches – for married couples and single persons.

Chin thanked the donors and contributors, especially the late George Yong Nyan Ted from Architect Design Practice, for helping to make the columbarium a reality.

Previous ArticlePAJLM praised for helping Lawas folk in Miri
Next Article Communities to work with SOS to protect neighbourhoods against crime, rabies outbreak