Sunday, September 19
You are at:Home»News»Masing warns against One M’sia concept 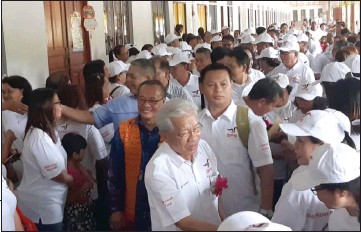 Masing said: “The dangers of accepting the concept of One Malaysia as suggested by Dr Mahathir, where the need of passport travelling in Malaysia maybe irrelevant later.

“This was made clearer by Muhkriz in his debate that it is ridiculous for Malaysians to use passport travelling to Sarawak.”

Masing relayed this message in front of 1,000 people gathering at the 28-door Rumah Geraman at Tada in Ngemah, Kanowit where a minor rural project fund totalling RM138,000 was disbursed yesterday.

Aaron and Ugak also took the opportunity to brief those present on what actually happened during the tabling of the bill to amend Article 1 (2) of the Federal Consitution aimed at restoring the regional status of Sabah and Sarawak.

If it was not done in a hurry and details were properly discussed, GPS would have supported the bill, the two MPs said.

Masing said: “Once the immigration flood gate is opened Sarawak will be inundated by Malayan professionals who will not require work permits to operate in Swak like doctors, lawyers and big companies, etc.”

“Sarawakians will suffer. That is why immigration autonomy was stipulated in the Malaysia Agreement 1963 (MA63). Mukhriz wanted it abolished,” he added.

It is therefore of prime importance that GPS must control the Sarawak State Legislative Assembly (DUN), he stressed.

“That (Sarawak DUN) would be our last stand against Pakatan Harapan’s (PH) encroachment to our land and resources,” Masing said.