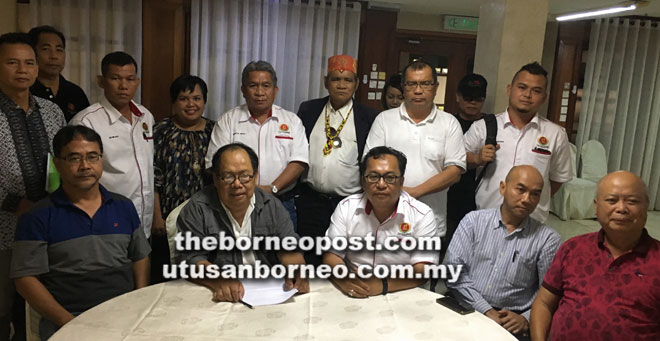 Acting PBDS Baru president Patrick Anek Uren says the party is looking ahead to the next state polls with keen interest in stopping peninsula-based parties in PH from taking control of Sarawak State Legislative Assembly (DUN).

He warns that should this ever happen, the outflow of Sarawak’s resources would be without control and ‘the original Sarawak of today’ would soon disappear.

“We will work together with ‘friends’, whom we cannot name yet, but these are parties that share similar objectives and policies with us,” he told reporters at a hotel here yesterday, adding that PBDS Baru would not cooperate with any peninsula-based parties such as Parti Keadilan Rakyat (PKR), Democratic Action Party (DAP), Parti Pribumi Bersatu Malaysia (Bersatu) and Parti Amanah Negara (Amanah).

“We will oppose them.”

On the meeting, Anek said the supreme council had resolved that the party was in tandem with the stand taken by the parliamentarians from Gabungan Parti Sarawak (GPS) who abstained from voting on April 9, during the second reading of the Bill to amend Article 1(2) of the Federal Constitution.

“We are saying so because there are a lot more things not yet done and should have been done even before the discussion of that amendment.

“And for that reason we, being a local party, our struggle is with all Sarawakians.

“We want to protect our resources, our rights, and what should belong to us must come back to Sarawak,” he said.

Anek also said he would remain the acting party president until PBDS Baru’s triennial general meeting (TGM), which must be held before or on July this year.

Prior to Cobbold’s passing, Anek was the deputy president.

At the coming TGM, Anek said the party’s constitution would also be amended to allow for the formation of new branches.

“Once this is done, the actual number of PBDS Baru members would be known,” he said.

PBDS Baru was registered in 2013 – it was formed by hardcore followers of the now-defunct PBDS.