Friday, October 7
You are at:Home»News»Sabah»Malanjum has left legacy to be emulated – SLS 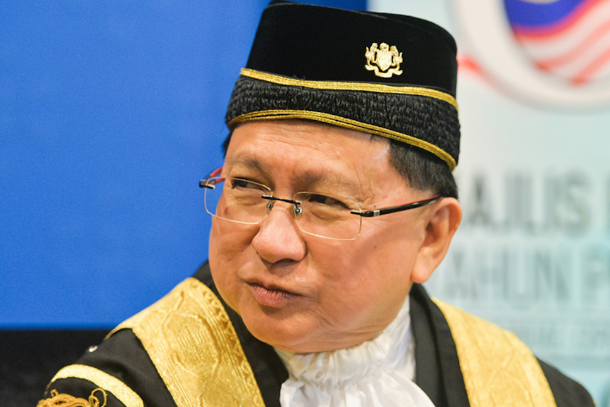 KOTA KINABALU: The Sabah Law Society (SLS) records its profound appreciation to the outgoing Chief Justice of the Federal Court, Tan Sri Datuk Seri Panglima Richard Malanjum for the enormous contribution to the legal fraternity during his time on the bench which ended on April 14, 2019.

In response to Malanjum’s outgoing note penned to the judiciary, the SLS on behalf of its members similarly bid farewell and in doing so, recognise the significant impact that he has made towards the dedicated improvement of the administration of justice in Malaysia.

“Tan Sri Richard Malanjum’s impressive career path spanned the complete legal spectrum – from private practitioner to holding the highest office in the judiciary. Whilst in office as the Chief Judge of Sabah and Sarawak and more recently as the Chief Justice of the Federal Court, his vision for reforms saw the judiciary embrace technology, the empaneling of judges in the Federal Court via e-balloting, the practice of collective decision making amongst the four office bearers of the judiciary and the promotion of transparency in the judicial appointment process by engaging and consulting with the three Bars of Malaysia,” said Brenndon.

Furthermore, he said the regular consultative meetings between representatives of the Malaysian Bar, the Sabah Law Society and the Advocates Association of Sarawak have had a positive impact towards strengthening the relationship between the members of the Bar and the judiciary as partners in carrying out the administration of justice.

“It would be amiss if the SLS did not also record the lasting impact that Tan Sri Richard Malanjum’s mobile court initiative has had to the rural community of Sabah. This notable and impactful program will no doubt continue and the members of the SLS remain committed to providing their legal services pro bono to the unrepresented and under privileged,” he said in a statement yesterday.

“Whilst his presence will certainly be missed after 27 years of service in the judiciary, it is hoped that his accomplishments will inspire the next generation of high achievers from the legal fraternity,” he added.

In the meantime, the SLS on behalf of the members wishes Malanjum the very best on his retirement. However, in view of his vast judicial experience and exceptional drive for enhancing access to justice, the SLS looks forward to welcoming and supporting post retirement collaborations with the legal fraternity in Sabah.

In his farewell message to the judges, officers and employees of the judiciary upon his retirement on Friday, Malanjum said:

“All I ask from you is to protect the judiciary no matter what others may say.”

He said the judiciary is the last bastion of justice and the people’s last refuge for fairness and equality under the rule of law.

“Please do not let it down from within or outside, even if you may feel you are not getting your fair due. Give your best, expect nothing!” he said.

Malanjum retired after serving the judiciary for 27 years. He had taken leave earlier and is currently abroad.