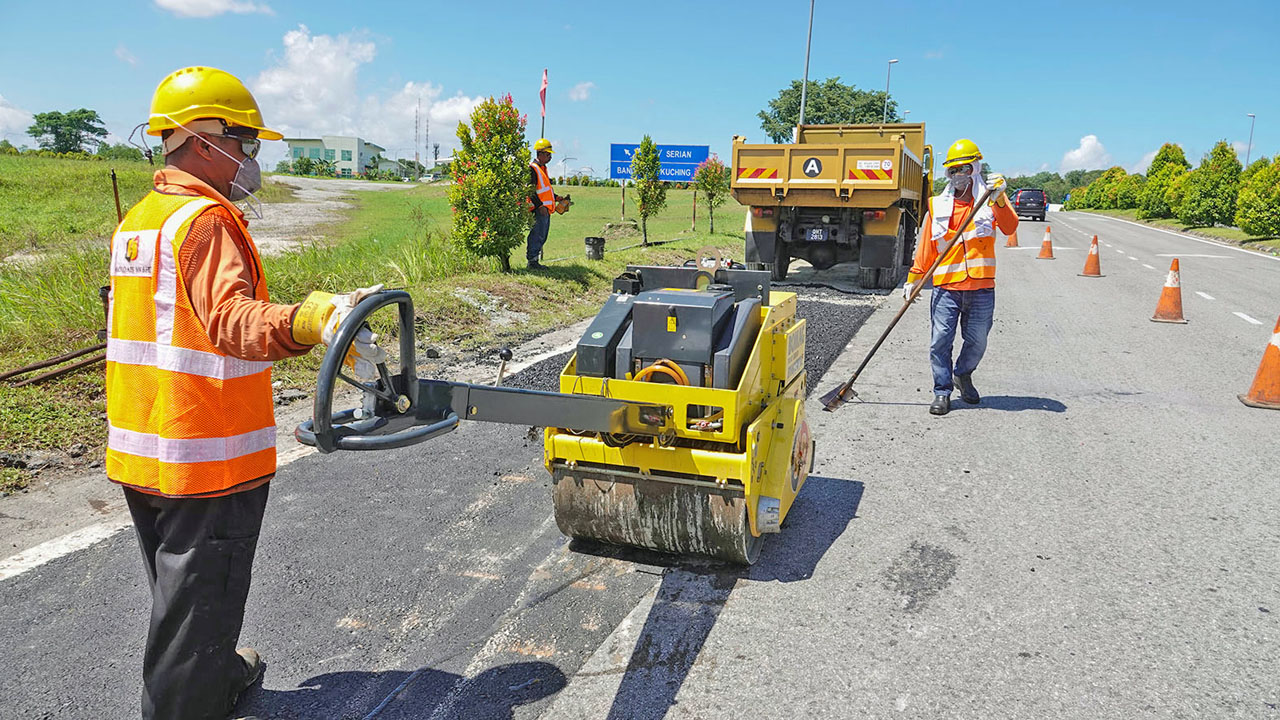 Performance-based contracts require the contractor to achieve predetermined performance indicators for each category of work before any payment from the employer is received.

KUCHING: Roads are often overlooked as the important connector it is: linking vast areas, allowing for safe passage between destinations and connecting towns to stimulate economic and social development.

Maintaining those roads play a crucial factor in keeping the smooth flow of traffic, especially considering Sarawak has over 51,000 kilometres of road.

Thus, when cases of blockages or land slippages occur, it becomes top priority for CMS Roads Sdn Bhd (CMS Roads) to respond quickly and efficiently. In view of these issues, CMS Group chief executive officer – operations Goh Chii Bing has now made clarifications on this matter in an exclusive interview with The Borneo Post:

Question: Over the past few months there seems to be an increasing number of incidents where road maintenance and repairs have been reported by the public and have made news headlines. Why is this so?

Goh: There is a general expectation by the public that there is no disruption to road connectivity at all times, but in truth, this is not realistic. The total road length in Sarawak is over 51,000 kilometres (km), spread across all types of terrain. Instances of land slippage or soil erosion occur and heavy rains are predominantly the cause of these incidents, especially during the monsoon season.

Question: Is there a long-term solution to solve road damage caused by the heavy rains, land slippage and soil erosion?

Goh: One of the things that makes Sarawak so beautiful is our amazing geography and topography. So, on one hand, we have absolutely breath taking scenery.

On the other hand, extremely challenging terrain. Sometimes the land slippage starts a couple of hundred metres above the road level and washes down and there is nothing anyone can do about that. Also, when we talk about heavy rains, we are talking about serious volumes of water. In the course of 2018, Sarawak received between 330 and 460 centimeters of rain; that is 1.75-times higher than the average 200 to 250 centimeters in Peninsula Malaysia. One other factor to consider is that some of these areas have developments and massive land clearing higher up the slope, this again is a factor when it comes to land slippage and erosion. This is why it is absolutely crucial that we build our roads at the highest possible quality standards and respond to any reports as fast as possible.

Question: The most recent callout was on February 24, 2019 when a land slippage occured on Jalan Pakan-Entabai. What happened here?

Goh: In the case of the land slippage that occurred at KM 11 Pakan-Entabai, Initial reports again indicate land slippage caused by soil erosion brought about by days of prolonged heavy rains. CMS Roads Sdn Bhd’s team was onsite within 60 minutes. Again, I think the team did well given the remoteness of the incident area because we are talking about getting manpower and machinery to an area that is approximately 30 minutes’ drive from Sarikei.

Question: There is a perception that CMS has the lion’s share of road building and road maintenance contracts. Why do you think this is and can you tell us more about your contract?

Goh: That is a very good question, but I must clarify a point first before answering. Out of the 51,000km of roads in Sarawak, approximately 30,360km of those are State roads and CMS Roads is only contracted to maintain 20 per cent or 6,262km. On the question of perception, there are many factors that could have combined to shape this. For example, CMS Roads has been in operation for over 15 years and we have hundreds of branded vehicles and machinery travelling around the State on a daily basis, which means that it would be easy to think of roads and automatically think of CMS.

Another factor is possibly the publicity that CMS Roads gets. The CMS Roads team invested over 21,000 man-hours on 64 different corporate social responsibility (CSR) projects last year, much of this would have been picked up by the media and would have mentioned CMS Roads. Sometimes having a strong brand that is almost a household name does have its issues.

As for the contract itself, it is actually really interesting and not everybody knows what it actually entails. We are the only company that has a ‘Performance-Based Contract’ and not a ‘Quantity Based Contract’.

In fact, CMS Roads was the first adopter in South East Asia of such a contract and to this day, we are still the only one in Malaysia. Performance-Based Contract (PBC), as its name suggests, is results-oriented and focuses on quality and outcomes. It requires the contractor to achieve predetermined performance indicators for each category of work before any payment from the employer is received.

PBCs are widely used in developed countries and are recommended by the World Bank for the preservation and maintenance of road assets. So, while others get paid per kilometre, we get paid based on delivering a predetermined set of targets or key performance indicators (KPIs). That is one reason why we naturally respond to any report of road damage so quickly, simply because we have an obligation to ensure absolute quality to the Public Works Department (JKR) and road users at all times.

Question: When you say you respond quickly, do you have the data to back that up?

Goh: A resounding yes! We continually track every call-out and response that CMS Roads attend to. In 2018, CMS Roads was called out on nine occasions. Three times were to remove fallen trees, three times to remove debris on the road caused by land slippage and three times to repair roads damaged by soil erosion.

Most of these incidents were caused by the heavy rains. Overall for 2018, CMS Roads’ average response time was under an hour (58.89 minutes average to be precise). CMS Roads has invested heavily in state-of-the-art machinery and equipment, and having strategically located RMU’s (Road Maintenance Units) at different locations throughout the State enable us to respond and reach any incident sites fast.

But in truth, rapid response times is just one positive KPI that PBCs deliver. Other benefits of PBC’s are annual savings of 10 per cent to 20 per cent to the State; higher maintenance standards; annual budgeting is easier thanks to fixed rates for different types of work; transfers the obligations and risks of work management from the State to the contractor; and enables the contractor to incorporate new technologies and equipment. 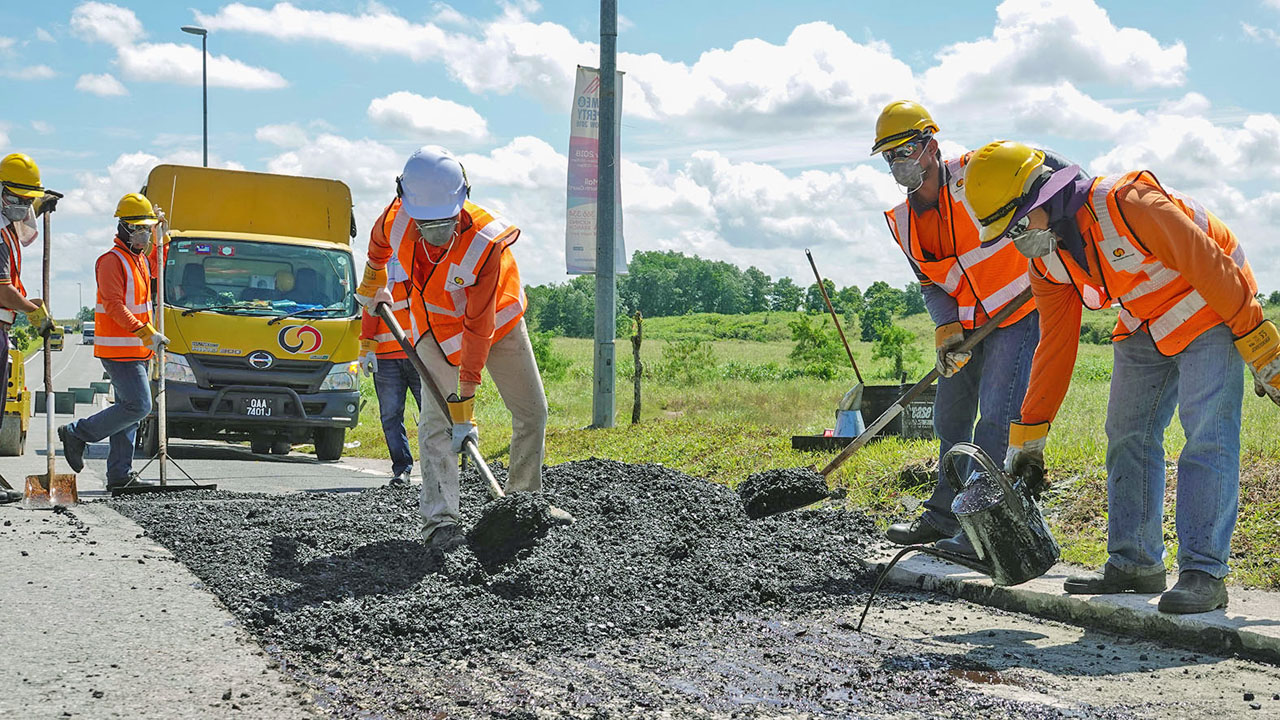 CMS Roads has invested heavily in state-of-the-art machinery and equipment, and having strategically located RMU’s (Road Maintenance Units) at different locations throughout the State enable us to respond and reach any incident sites fast.