Thursday, April 15
You are at:Home»Columns»The Sumatran rhinoceros – just elusive or near extinction WHILST very much a large mammal, this is the smallest and rarest member of the family Rhinocerotodae, which, translated from the Greek, means ‘nose horn’. The Sumatran rhino, aka hairy rhino, once roamed from the Himalayan foothills in Bhutan and northeast India, through southern China, Myanmar, Thailand, Cambodia, Laos, Vietnam, Malaysia, and Indonesia’s Sumatra and Kalimantan. However, the last Ice Ages, the Pleistocene (1.4 million to 11,000 years ago), saw a rapid decline in their numbers as the Eurasian continental ice-sheets extended southwards as this pachyderm’s habitat and food supply were gradually lost. Today, there are various estimates of the numbers of Dicerorhinus sumatrensis (two horned rhino) living in the wild.

Six years ago, a captive male Sumatran rhino died in Cincinnati Zoo in the USA. He had sired three offspring and so his 33-year-old life was not in vain. From the DNA analysis of his genes, scientists determined that the total population of Sumatran rhinos reached nearly 60,000 about 950,000 years ago. During the Ice Ages sea-levels fell, thus creating land bridges to allow pachyderms to migrate from the Malaysian Peninsular south eastwards across the South China Sea and south westwards across the Straits of Malacca. When the ice-sheets melted, sea-levels rose and this probably explains where they have been seen on Sumatra, Java, and Borneo in historical times.

Actual sightings and records of these animals are difficult to verify, for they are very solitary and elusive, apart from their congregations at saltlicks especially during the mating season. In 2017, variations in their total numbers ranged from 100 to 250 wild animals. Today, that figure stands at 82 with many of these living in protected areas or in zoos. This species is truly hanging on by a thread. In the Cincinnati Zoo, breeding programmes have been relatively successful and with great determination they have returned several offspring to Indonesia.

As long ago as 1854, Alfred Russel Wallace mentions them in his visit to the Ophir Ranges in Melaka. Whilst he saw their tracks and dung, he had to wait for “their barks”, when he was at Lobo Raman in Sumatra in 1861. He concluded, in a letter, “I am not aware of their existence.” The very early 20th century curator of Sarawak Museum, Robert WC Shelford, in his 1916 book, ‘A Naturalist in Borneo’, briefly mentioned rhinos “as confined to the mountainous regions in the far interior of the island” and that “the horn is much prized by the Chinese for medical purposes”.

More recently, in 2004, Hans Hazebroek and his co-authors, in their joint publication ‘Maliau Basin’ noted through the work of JB Payne and others in the publication of their findings of 1998 on an expedition in Sabah, that “these animals were also located in the Danum Valley Conservation Area and in the Tabin Wildlife Reserve”.

There appear to be three species still existing. The Western Sumatran rhinoceros is located mostly in Sumatra’s national parks at Bukit Barisan Selatan, Kerinci Seblat, Gunong Leuser, and at Wey Kambas Rhino Sanctuary. This species is now extinct in Peninsular Malaysia through habitat loss and poaching. The Bornean or Harrison rhino lives in east Kalimantan and is now extinct in the wild in Sabah, with just two in captivity at the Borneo Rhinoceros Centre there. The Northern Sumatran or Chittagong rhino, the largest of the three species, may well exist in Myanmar and even possibly in Peninsular Malaysia but we will have to wait and see!

Like its larger African ‘cousins’, the Sumatran rhino has two horns; the nasal, anterior horn varying from 15cm to 25cm in length, and the posterior horn or knob less than 10cm long, both of which are composed of keratin. With folds of skin around its neck and two thicker folds behind its front and before its hind legs, it is truly armour plated! It is often described as the latter day ‘woolly rhino’, with its tufts of long hair around its ears and at the end of its tail.

With much shorter legs than its African counterparts, it has greater agility to climb steep slopes and its reddish-brown skin distinguishes it from African species. Its poor eyesight is compensated for by its large nostrils and a sense of smell for mating purposes and, moreover, to locate its food and water supplies.

Its bodily weight is between 500kg and 960kg, while its shoulder height varies from 120cm to 145cm. I, certainly, if lucky, would rather catch a glimpse of this mammal at a distance. Their diet is composed of fresh leaves and twigs which are high in fibre but relatively low in protein content. Eating mostly at dawn or dusk, they have been glimpsed to take an afternoon snack after a visit to a saltlick in order to assist their digestion. In the heat of the day they frequently wallow in mud baths for up to nearly three hours. Such mud-holes not only cool their skin but also rid them of horseflies and ticks, and also act as skin conditioning. 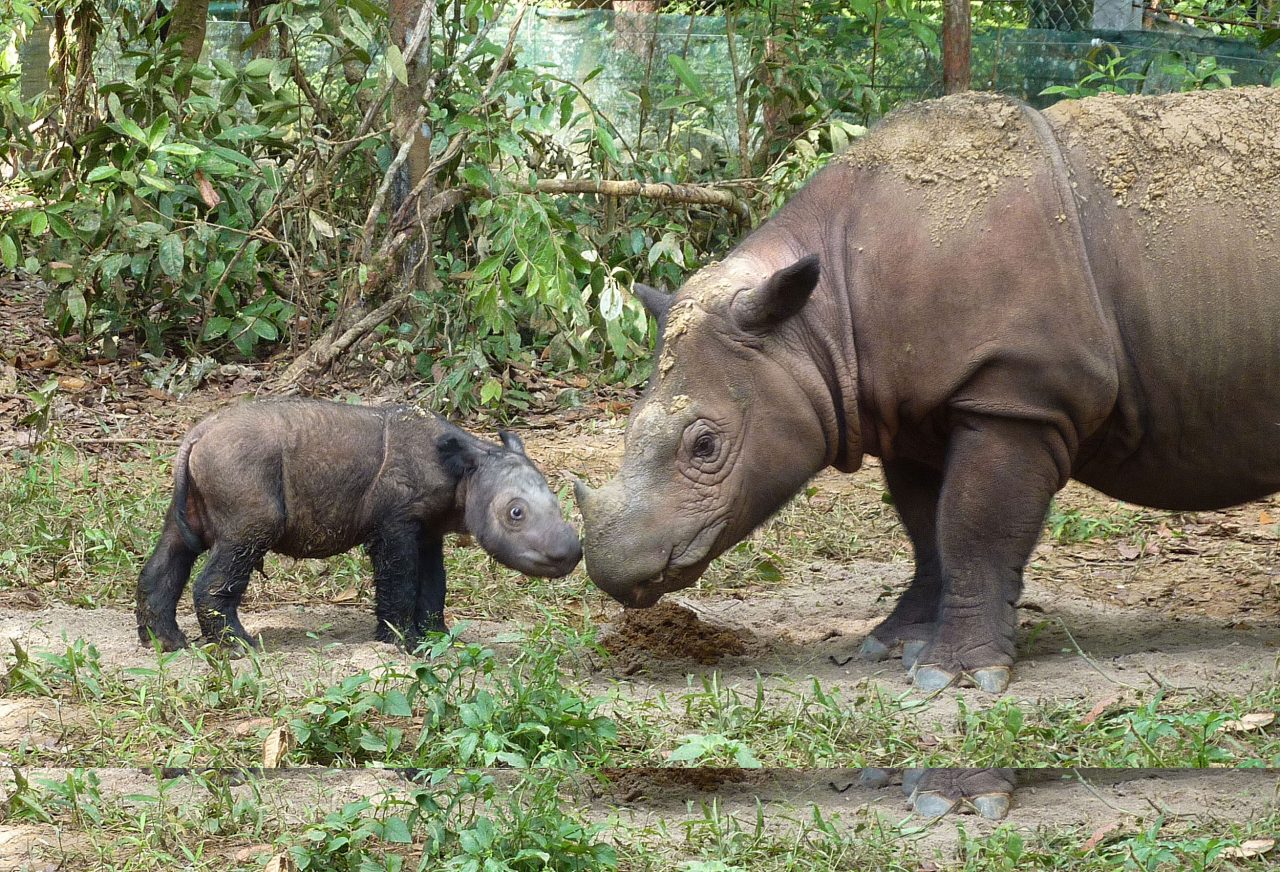 Many of these animals can only be found in protected areas or zoos. – Photo by S Ellis

Mostly solitary animals, with males ranging over an area of 50 square km and females from 10 square km to 15 square km, visiting a joint saltlick can, indeed, be a social occasion when a female is on heat. The male’s sexual maturity happens at about 10 years and the female between six and seven years. With a gestation period of 15 months, a single calf is born weighing at almost 45kg. It will suckle as much as 1kg to 2kg of mother’s milk daily and will be weaned after a year, then accompanying its mother for another three years. The times between pregnancies have been estimated as from four to five years. Hence their small total estimated population numbers. If not harassed by man, their average lifespan, in the wild, can be from 30 to 45 years.

These are the most vocal of all rhino species, communicating with others with whistling and whining sounds such as eeps, whales, and whistle-blows, often carried afar, as danger signals, mating, or location calls. They also mark their territories by twisting twigs in distinctive patterns, and with their defaecations and urine.

There is no doubt that the breeding programme at Cincinnati Zoo proved successful in producing two male and one female calves, between 2001 and 2007. The last male born was appropriately named Harapan, meaning hope. These animals have been rightly relocated to their natural habitats in Indonesia.

In other captive reserves in the western world and in Asia, many rhino deaths are attributed to kidney or liver failure. We cannot rely on the pure hope that such costly schemes in reproduction, as in zoos or wildlife reserves, will preserve the existence of this mammal’s population. To date, hope has depended upon public donations to wildlife charities to afford such schemes.

My hope is that there are more of these pachyderms living in the wild in remoter areas of Malaysia, Indonesia and Myanmar which, when discovered, will lead to new government funded national parks to preserve Sumatran rhinoceroses. Only then may they be removed from their current listing on International Union for Conservation of Nature (IUCN) Convention on International Trade in Endangered Species of Wild Flora and Fauna (Cites) list as critically endangered.

Their present poachers can be employed as gamekeepers, properly armed, and properly paid. For too long, world opinion has focussed on their habitat loss through the growth of commercial agriculture and illegal logging, ignoring the fact that the slaughter of these animals has been dictated by poaching for ivory and its ever-soaring market prices in supplying so-called traditional medicine practices for this or that human ailment.

Undoubtedly, my greatest hope is that the three aforementioned countries, together with others, will provide and fund university postgraduate research in the fields of zoology, conservation and genetics, all with a sense of adventure and a willingness to suffer environmental hardship, to trek deeper into the interior areas where Sumatran rhinos may still exist. Of course, such researchers will need a command of local dialects.

It is only through education that poaching may cease and truly accurate numbers of wild Sumatran rhinos be established. If I was only half a century younger, I would have volunteered for such a challenge! The Sumatran rhino’s subspecies are the nearest relatives to the ‘woolly rhinos’ that existed in our only world up until 11,000 years ago. It was man ‘the hunter’ that extinguished them.