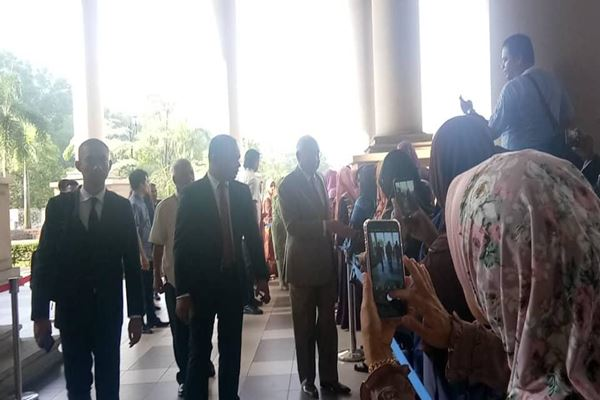 Najib greets his supporters upon his arrival at court. Bernama Photo

KUALA LUMPUR: A bank officer told the High Court here today that a total of RM50 million was transferred from an account of Gandingan Mentari Sdn Bhd to that of Ihsan Perdana Sdn Bhd in three transactions in 2014 and 2015.

Gandingan Mentari is a subsidiary of SRC International Sdn Bhd while Ihsan Perdana is a company undertaking corporate social responsibility programmes for SRC.

Rosaiah Mohamed Rosli, 53, a processing officer of Affin Bank at Menara Affin Bank in Jalan Raja Chulan here, confirmed that Affin Bank received data via the Single Credit Confirmation Advice for crediting the account of its client, Ihsan Perdana, with RM40 million from an AmIslamic Bank account belonging to Gandingan Mentari on Dec 24, 2014.

The Single Credit Confirmation Advice is a document generated by the Real-time Electronic Transfer of Funds and Securities System (RENTAS).

“I confirm that Affin Bank credited RM40 million into Affin Bank account no. 106180001108 belonging to Ihsan Perdana on the same day (Dec 24, 2014),” she said when asked to identify a Single Credit Confirmation Advice referred to by Deputy Public Prosecutor Datuk Suhaimi Ibrahim.

Rosaiah, who was reading a witness statement, also confirmed that the money was entered into the crediting system under the teller column by Elfidawati Ali Buzar at 3.17 pm the same day.

“It was verified by Group 2, that is Abdullah Hadi Hamidon, and approved by Mohd Zulhaini Zuall Cobley. The confirmation, verification and approval process for crediting this amount of money was done on the same day, Dec 24, 2014,” she said on the eighth day of the corruption trial of former prime minister Datuk Seri Najib Tun Razak in relation to SRC International funds of RM42 million.

Rosaiah, the 20th prosecution witness, also confirmed that Affin Bank credited RM5 million from the AmIslamic Bank account of Gandingan Mentari into the same account of Ihsan Perdana on Feb 5, 2015.

“I confirm that this RM5 million was entered into the crediting system under the teller column by Atikah Mohd Yasin at 3.49 pm.

“It was verified by Group 2, that is Felicity Ann Abraham, and was approved by Abdullah Hadi Hamidon. The confirmation, verification and approval process for crediting this sum of money was done on the same day, that is Feb 5, 2015,” said Rosaiah, who has been with the processing division since 2001.

Rosaiah also confirmed that Affin Bank credited another RM5 million from the same account of Gandingan Mentari into the Affin Bank account of Ihsan Perdana on Feb 6, 2015.

Najib, 66, is charged with three counts of criminal breach of trust, one count of abusing power and three counts of money laundering involving SRC International funds of RM42 million.