Saturday, May 15
You are at:Home»News»King, Queen arrive in Kuching for two-day visit 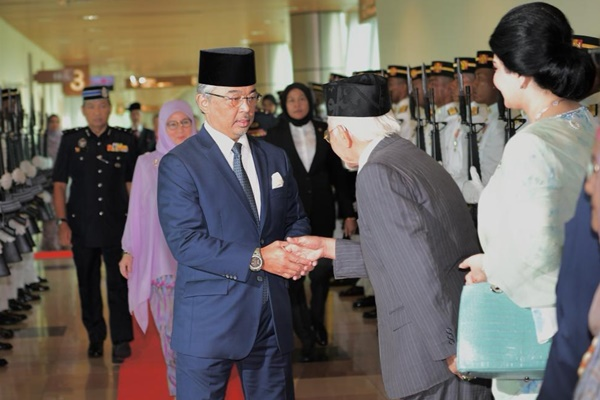 Sultan Abdullah is greeted upon arrival by Taib. – Bernama photo

The special aircraft flying in the royal couple landed at the Kuching International Airport at 11.20 am.

This is the first visit of Sultan Abdullah to Sarawak after being sworn in as the Yang di-Pertuan Agong on Jan 31.

The Public Communications Unit (Ukas) of the Sarawak Chief Minister’s Department said in a statement that in the afternoon, the King and Queen would visit nearby tourist spots, namely India Street and the Kuching Waterfront.

Then in the evening, Their Majesties would attend a banquet with Tun Abdul Taib and his wife at a leading hotel here, along with the Chief Minister, state Cabinet ministers and other distinguished guests.

The statement said that after the banquet, the royal couple would witness a display of the musical fountain at the Kuching Waterfront.

The next morning, His Majesty is scheduled to attend a briefing at the State Islamic Council here before performing Friday prayers at Masjid Darul Hana.

Meanwhile, the Queen will have a separate event at the Old Kuching Courthouse where she will be accompanied by the Chief Minister’s wife to visit the Ranee Brooke Museum, a handicraft exhibition and to witness a traditional food cooking demonstration.

Their Majesties are scheduled to return to Kuala Lumpur in the afternoon. – Bernama