Tuesday, October 19
You are at:Home»News»Idris, Lo debate on employment opportunities at forum 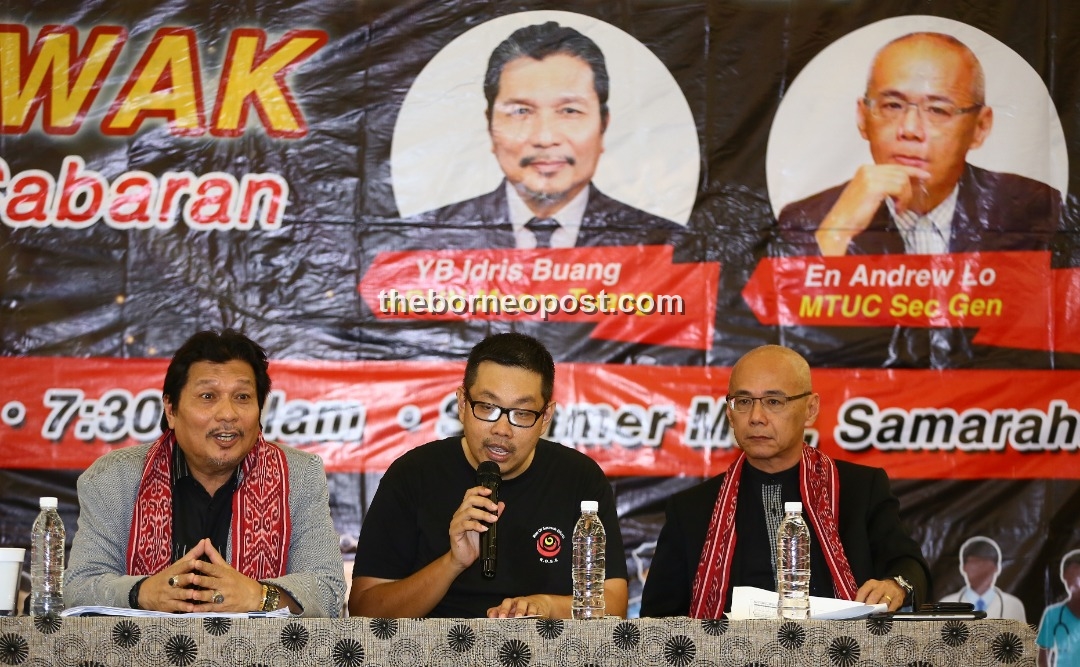 Idris (left) and Lo (right) participated the forum that was moderated by Geoffrey Tang at Summer Shopping Mall yesterday.

Organised by Rise of Sarawak Efforts (ROSE), the two-hour forum took place at the Summer Shopping Mall from 7.30pm to 9.30pm and both individuals were each given 20 minutes to present their arguments and another 10 minutes to conclude their stand on the topic.

The topic of the forum revolved around the current employment situation in the state and the challenges faced by the general job seekers besides the actions taken by the state government to solve the complex issue.

Idris, who was given the opportunity to speak first, cited statistics from Department of Statistic Malaysia that Sarawak has a labour force of 1.3 million in 2017 with an unemployment rate recorded at only three per cent (38,900 unemployed people) in the same year.

“All parties concerned such as the state government or private sectors had contributed immensely to the expansion of the country’s economy and in turn improved the state labour market,” he said, adding that the state employment rate was lower than the national average of 3.7 per cent in corresponding year.

In referring to the statistics that mentioned earlier, Idris said he was saddened that about 40 per cent (15,000 individuals) of those unemployed in 2017 comprised of graduates with at least a diploma qualification.

“But, we must remember that this is the challenge (unemployment among graduates) that has to be overcome by stakeholders, including state and federal governments as both should shoulder such responsibility for the benefit of the local people.”

Idris, who is Muara Tuang assemblyman, reiterated that a stable political landscape and health of the country’s economy are among the main factors that would affect the local labour force.

“Despite headwinds from global and national economy and geo-political tensions, we can see that the state economy and labour market are still performing strongly.”

He explained that the unemployment among graduates might be due to a myriad of factors such as not wanting to work at the location offered and jobs that do not suit their preferences.

“The initiative and policies implemented by the state government under the leadership of Datuk Patinggi Abang Johari Tun Openg have created great opportunity to the local business community, especially in such challenging landscape today.”

Idris pointed out that at the time when the federal government is facing financial constraints, the state managed to attract many investments and implement projects such as the Coastal Highway, rural basic infrastructure projects, water and electricity supply and the establishment of Sarawak Corridor of Renewable Energy (SCORE) and Samalaju Industrial Park.

“The investment channelled into SCORE had contribute significant returns to the state economy and thus it would have a greater spin-off effect across different industries in the state,” said Idris.

Looking at Samalaju Industrial Park, he said that the high technology park itself employed about 12,000 workers and 99 per cent of the workforce of foreign companies that invested in the industrial park consisted of local workers.

Through the state Ministry of Education, Science and Technological Research, Idris said the state government had initiated collaboration with public and private higher learning institutions and also technical and vocational education training (TVET).

“The recently held Sarawak Career and Training Fair (Scat Fair) attracted about 20,000 visitors and 8,000 people submitted their application for job during the career fair,” he said, adding that the state government had also formed a data centre to act as a job-matching platform a to assist the local people in securing job opportunities.

On the other hand, Lo opined that employment rate as presented by Idris did not fully reflect the actual employment situation in the state as the quality of jobs offered are more important.

“Full employment by right should lead to higher salary because employers cannot look for workers so they have to offer higher salary but that is not the case of Sarawak and Malaysia,” said Lo.

According to him, a country can considered to achieve full employment when the unemployment rate is only three per cent.

Lo pointed out that the median wage of a workers in Sarawak is only RM1,350 although the gross domestic product (GDP) of Sarawak’s economy is the third largest in the country, behind Selangor and Kuala Lumpur.

“More than 60 per cent of the jobs created in the state are of lower value despite the state having achieved full employment,” he said

He felt that such scenario is a vicious cycle as lower value jobs would bring to lower income for workers who then have lower disposable income to spend and affected the business community.

He also lamented that the not enough quality jobs are being offered in the labour market as more graduates entered the workforce for the past four years and that the state economy is only controlled by a few major business players.

“Now the economy is global. We cannot close our doors in the names of trying to protect our self as it would not help us,” Lo said, as he urged the local business community to move away from sunset industry and focus on digital economy instead.

Moreover, Lo suggested that the state government need to set proper guidelines and employment policies to guide the state employment is moving in the right direction.

He also recommended that the state government established a state human resource ministry to look into employment issues in the state and seek consultation with related parties for employment policies to be effective.

“There must be consultation. You cannot think that you are the best. You need to listen to the people to get ideas only then policies and decision made would benefit everyone,” said Lo.

Lo also blamed that the lack of command in the English language among the younger generations contributed to depressed wages in the state.

In his closing remark, Lo reminded the workforce to always be flexible and adaptable to changes in the state economy in order to ensure the workforce continue to remain relevant with the world economy continue to be disrupted by technology.

The debate ended in a positive note with both parties shaking hands to settle their differences as they both agreed that they were only fighting for the betterment of the younger generation in the state.