Saturday, December 4
You are at:Home»World»Security high as Sri Lanka marks one week from suicide attacks 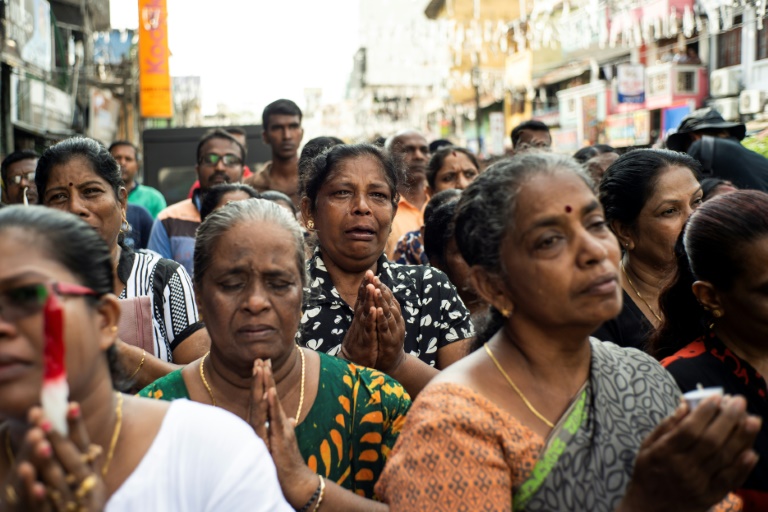 A heavily-guarded vigil was held outside St Anthony’s Shrine in Colombo at 8.45am, the moment the bomber struck. – AFP photo

Sri Lanka’s Roman Catholic leader on Sunday condemned the Easter attacks as “an insult to humanity” as the tense and grief-stricken country marked a week since suicide bombers hit three churches and three luxury hotels.

The Archbishop of Colombo, Cardinal Malcolm Ranjith, held a private mass after cancelling all public services amid fears of a repeat of the bombings that killed 253 people.

A heavily-guarded vigil was held outside St Anthony’s Shrine in Colombo at 8.45am, the moment the bomber struck the church last week, killing dozens of worshippers.

“What happened last Sunday is a great tragedy, an insult to humanity,” the cardinal said in a chapel at his residence, where the mass was attended by President Maithripala Sirisena and Prime Minister Ranil Wickremesinghe.

“Today during this mass we are paying attention to last Sunday’s tragedy and we try to understand it,” he said calling for prayers for the victims.

“We pray that in this country there will be peace and co-existence and understanding each other without division,” he said.

At exactly 8.45am, the singing of hymns by scores of people outside St. Anthony’s church stopped and the bells tolled. The hands on the tower clock are stuck at the time of the blast.

“I come to this church every Sunday, it feels like my second home,” said Dharshika Fernando, 19, fighting back tears.

Thousands of Sri Lankan troops remained on the streets, guarding churches and mosques for the symbolic day.

Security forces also carried out new arrests, a day after at least 15 people were killed in a raid on a jihadist hideout where suicide bombers blew themselves up.

Police said they arrested two “most wanted” Muslim suspects in connection with the Easter bombings, taking the total number in detention to more than 100.

Mohamed Saadik Abdul Haq and Mohamed Saahid Abdul Haq were on a list of six “most wanted” radicals issued on Thursday.

Police spokesman Ruwan Gunasekera said the two were arrested in the central region of Nawalapitiya, about 125 kilometres (78 miles) east of Colombo on Saturday night.

President Sirisena said on Friday there are about 140 IS followers across the country who were still being hunted.

“We can and we will eradicate all of them very soon,” Sirisena vowed.

On Saturday, three men set off explosives killing themselves, three women and six children after a showdown with security forces near the eastern town of Kalmunai.

Police said three other suspected suicide bombers were shot dead by security forces outside the hideout that had been under siege for more than an hour. A civilian was also killed in crossfire.

The Islamic State group, which claimed responsibility for the Easter bombings, said the three men who blew themselves up at Kalmunai were also members of the militant group.

A statement posted by the IS propaganda unit, Amaq News Agency, said the men “clashed with them (Sri Lankan police) with automatic weapons, and after exhausting their ammunition, detonated on them their explosive belts.”

Kalmunai is in the same region as the hometown of the jihadist Zahran Hashim who founded the National Thowheeth Jama’ath (NTJ) group accused of staging the attacks.

Another raid in the region targeted a house where authorities said Hashim and the other sucide bombers filmed a pledge of allegiance to IS before staging their attacks.

The video was shown by IS when it made its claim of responsibility.

Video on state television showed explosives, a generator, a drone and a large quantity of batteries inside the converted studio. An IS flag and uniforms were also found, police said.

The firebrand cleric is said to have died in the attack on the Shangri-La, one of three Colombo hotels hit by suicide bombers at the same time as the churches.

In a sign of the tensions, the reopening of schools across Sri Lanka scheduled for Monday has been put back one week. Authorities have also kept up a 10.00pm to 4.00am nationwide curfew. – AFP