Monday, May 25
You are at:Home»Features»Reporters brave the heat in fire safety drill

(Third to fifth right) Law, Dr Teo and Khirudin with the participants taking the pledge.

THE Occupational Safety and Health Act 1994 aims to protect workers and prevent accidents at the workplace.

According to the same Act (514 Act), an Emergency Response Team (ERT) has to be set up at each building under the purview of the Fire and Rescue Department (Bomba).

Setting up the ERT or Fire Safety Organisation (OKK) is one of the compulsory conditions for obtaining the Fire Certificate (FC).

Bomba always gives the ERT the necessary training and monitors members’ level of readiness to increase efficiency in fire safety procedures at the workplace.

Media team leader Mardhati Yahya reports to the training instructor with the other team members lining up at the back.

The Miri Division ERT Team Drills Efficiency Competition was the highlight of the two-day programme, which saw 87 teams from 12 categories in the fray.

Participants put through their pace in the obstacle challenge.

“It’s not easy to be a firefighter. A lot of endurance is needed to lay the 12kg firehose. You feel the physical strain of handling the firehose which gets heavier in wet conditions,” said the reporter from Sin Chew Daily. 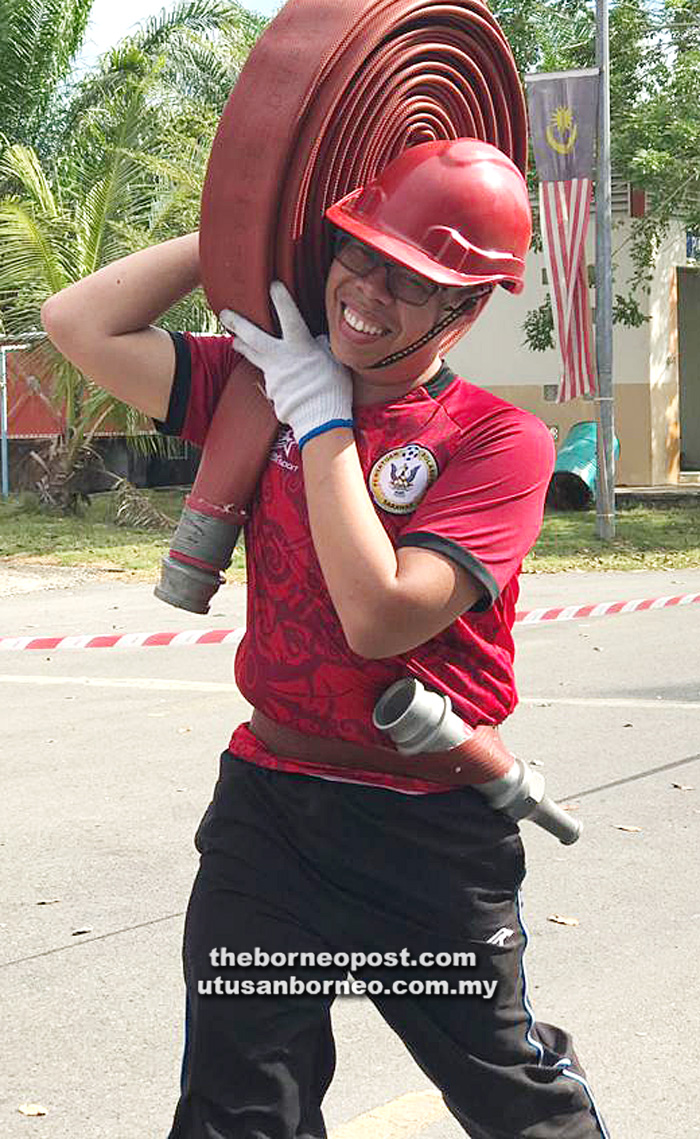 Mohd Aliff carries a fire hose during a drill for dry operations.

What she has taken away from the drill competition are knowledge on fire safety procedures and a close-up look at how firefighters contain raging infernos.

For fellow NSJA member Mohd Syaffuan Zaini, the competition was a baptism of fire.

“There were six of us from the print and electronic media in the NSJA team – four women and two men.

“We didn’t set any target because we just wanted to gain some experience from the fire safety training programme,” recalled the cameraman from RTM Miri.

Except for Choa, the six were all newbies.

Before the competition, Bomba personnel drilled the participants for dry and wet operations and handing of fire ladders.

“Although it was tough, I was very excited from the first training session. With Bomba’s guidance, my team was able to complete all the tasks,” Mohd Syaffuan said.

RTM broadcast journalist Mardhati Yahya noted that the training they went through needed total cooperation and commitment from the participants.

“Team work is of utmost importance. The going was tough but we weren’t demoralised. We learned to strategise, improve efficiency and reduce injury risks from the training.”

Mohd Syaffuan feels the excitement of handling the fire hose with Lai Yuk Fang as his assistant.

The Borneo Post reporter Zaheera Johari and her colleague Mohd Aliff Adzwan Abdullah from Utusan Borneo agreed the competition was highly relevant to their job.

Zaheera, who is NSJA secretary, said members of media should be exposed more to fire safety procedures, adding, “Fire safety training is to raise awareness of fire hazards in the workplace as well as the importance of acting competently and safely during emergencies.

“As members of the media, we should at least have some knowledge of fire safety procedures because we can be assigned to cover fire outbreaks. So it’s good to be prepared.”

Mohd Aliff, a crime reporter, was grateful he could attend the drill.

“In most organisations, there are fire evacuation drills for the staff. But for me, this was my first exposure to ERT drill training.

“I totally agree that members of media should be given more exposure to fire safety procedures. In this way, they will have the presence of mind to avoid taking unnecessary risks – and even offer some help – when covering a fire incident.”

Miri member of parliament Dr Michael Teo said the ERT has a crucial firefighting role as the first team to be deployed to the scene during an emergency.

“Emergencies often happen when organisations are not prepared to deal with them. Therefore, emergencies require immediate response because a small incident can turn into a crisis, if proper action is not taken to control it,” he added at the closing ceremony.

On the competition, he believed all the participants had undergone the required training in compliance with the Malaysian government standard – the Occupational Safety and Health Act 1994.

Law (fourth left) and Khirudin (fifth left) give the thumbs-up to NSJA for their participation in the drill.

He pointed out that the Act would help companies to provide safe workplaces and, in turn, improve the bottom lines of companies – big or small.

“Your commitment to this emergency response training is notable not only because you are committed to reducing emergencies and limiting destruction to your workplace but also because you’re dedicated to achieving the ultimate goal – saving lives.

“I believe the objective of this programme has been successfully achieved.”

He also paid tribute to the firefighters for making sacrifices in the line of duty.

“It takes special kind of person to become a firefighter. You work in extreme heat and unpleasant conditions to protect our communities. You see and experience things that affect you both mentally and physically.

“Every time you run into a burning building, throw yourselves out of windows, cut people out of cars to save lives, you’re making a difference.”

Previous ArticleHelping kids to fight cancer
Next Article When in Rome …