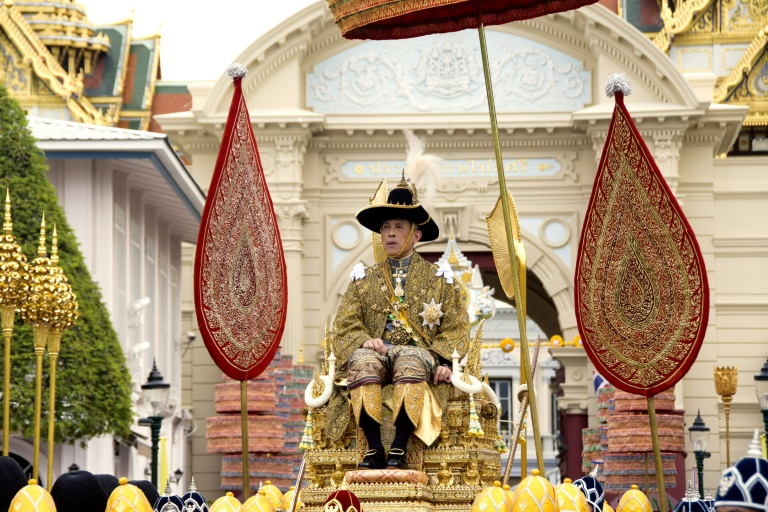 The Thai king’s coronation started on Saturday, and is the first in 69 years. – AFP photo

Thai King Maha Vajiralongkorn will be carried on a golden palanquin through Bangkok’s historic heart Sunday, a second day of coronation rituals which will bring the public up close to their powerful monarch.

The Thai coronation that started Saturday was the first in 69 years, a once-in-a-lifetime ceremony where Vajiralongkorn was anointed with holy water and placed the tiered golden Great Crown of Victory on his head.

Early Sunday, the king bestowed royal titles on family members who crawled to his throne as he sat next to his new Queen Suthida.

Thailand’s monarchy is wrapped in ritual, protocol and hierarchy all orbiting around the king, who is viewed as a demigod.

In the afternoon, Vajiralongkorn will emerge from the palace as soldiers in conical red hats carrying tiered umbrellas and royal standards flank the hours long procession.

“I will be here to save a spot at 5 am,” Kanha Kitvej, 80, told AFP the day before, as she watched soldiers march by the royal palace.

But the scorching heat may keep others away.

“I won’t go today because I’m afraid that I will faint due to hot weather,” said a woman in her mid-60s.

Roads in Bangkok’s old quarter have been closed down for the seven-kilometre (four-mile) procession, when the king will pass by crowds dressed in yellow — the royal colour.

Vajiralongkorn ascended the throne in 2016 after the death of his beloved father Bhumibol Adulyadej.

For many Thais, the procession is a chance to see the king in a country where the wealthy monarchy is the focus of reverence and veneration.

Criticism of the royal family in Thailand is guarded by harsh lese majeste rules that carry up to 15 years in prison.

All media must self-censor and the country’s lively social media platforms were subdued during the coronation.

The ceremonies have hewed close to traditions underpinning the Chakri dynasty, which has ruled since 1782.

But coronation contained a few surprises, such as the investiture of Queen Suthida, whose unexpected marriage to Vajiralongkorn was announced only days before.

The king and queen stayed the night in the royal residence, where a Siamese cat and chicken were placed on a pillow as part of housewarming rituals.

They moved to a throne hall Sunday morning where the king in white uniform bestowed the royal titles, including on 14-year-old Prince Dipangkorn Rasmijoti, who knelt in front of his father as he was anointed with water.

The teenager is the king’s son from his third marriage. He has six other children, including four sons from two previous wives.

Though present on day one, the king’s older sister Princess Ubolratana did not participate.

The king thwarted the political ambitions of Ubolratana in a royal command in February that torpedoed her attempt to run for prime minister with a party opposing Thailand’s junta, which seized power in a 2014 coup.

Election results from the disputed March poll are expected to be announced this week. – AFP

Previous Article‘Give this youth a chance to lead’ – Vivian Wong
Next Article Warisan must serve people with sincerity, honesty – Shafie