Thursday, August 6
You are at:Home»News»Warisan must serve people with sincerity, honesty – Shafie 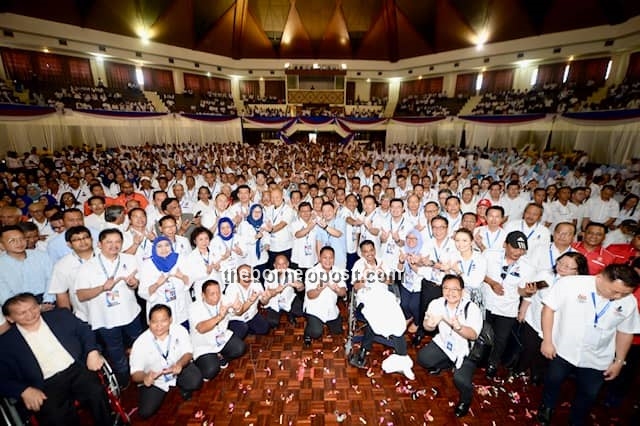 Shafie and Warisan Deputy President Datuk Darell Leiking with the delegates at the AGM.

PENAMPANG: It is not the number of members a party has that will ensure its success and relevancy, said Parti Warisan Sabah (Warisan) President Datuk Seri Mohd Shafie Apdal.

Speaking at the opening of Warisan’s annual general meeting here today, Shafie reminded the delegates that it is their values and desire to serve the people that will make that happen.

“There is no point having lots of members if the fighting spirit is not noble… if the desire to serve the people is not sincere,” he said.

Shafie pointed out that a party, even though it does not have many members, will still win an election if the people wants it to. This is because it was won the hearts of the people through its service to the rakyat (people), he added.

“Therefore Warisan must practice positivity and serve the people with sincerity and honesty,” he said.

Money is not the people’s yardstick, neither are ministerial nor party posts, he stressed and reminded party members that a party post does not guarantee the person will be a candidate in the general election.

Shafie also reminded party members to be united as disharmony will weaken the party and its struggles.

The Sabah Chief Minister also took those who keep accusing Warisan of issuing Malaysian identification cards and passports to illegal immigrants to task.

“You can ask Home Minister Tan Sri Muhyiddin Yassin if I have the authority or not? Ask him if I have issued (IC) or not?” said Shafie.

According to the Semporna MP, time is needed to implement changes promised.

“I know the rakyat’s expectations are high and it is not easy for a government that is barely one year old to make all their hopes come true but we will do the best we can,” Shafie added.