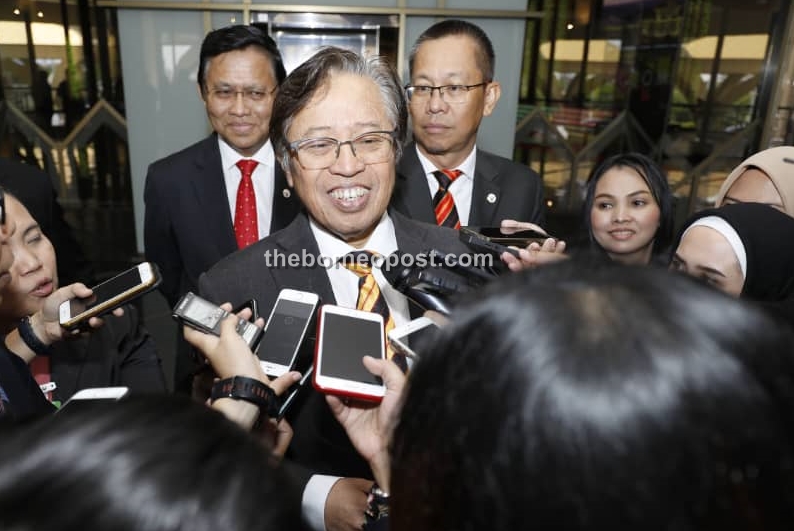 Abang Johari fields questions from reporters after his winding-up speech at DUN. Photo by Chimon Upon

Abang Johari said the Sarawak government will proceed with the construction of the LRT line following “many requests” from the public.

Speaking to reporters on the sidelines of the State Legislative Assembly (DUN), he revealed the project’s construction will involve a cost of less than RM5 billion.

He said he had received many complaints from the public regarding the traffic jam on the Kuching-Samarahan expressway, and the need for an LRT as a form of public transportation was further necessitated by the 20,000-strong student population in public universities such as Unimas and UiTM in Samarahan.

“The last time, I said I stopped the planning for the LRT. But now, because of requests from the people, we will focus on solving the congested expressway between Samarahan and Kuching.

“Feasibility studies have already been done before. The cost (of the LRT project) will be cheaper than the original one, because it is a shorter route,” he said.

Abang Johari was asked to elaborate on his point made in his ministerial winding-up speech, where he said the Sarawak government would proceed with the detailed technical study on the implementation of Phase 1 of the LRT project covering the most congested areas in Kuching and Samarahan areas using the most feasible option.

It was reported earlier that the LRT idea had to be shelved to give priority to supplying water and electricity to rural areas.

Also based on earlier news reports, three LRT lines were supposed to be implemented, namely Kota Samarahan to Sungai Baru for Line 1, Serian to Senari (Line 2) and City Dispersal Line (Line 3) which involved a cost of about RM10.8 billion.

Abang Johari said that critics were against the idea of building the LRT system, saying that it was not feasible to address the traffic jam problem and instead suggested building more roads and providing a free bus service to solve the issue.

“Based on studies we have conducted, no country in this world can solve traffic congestion problems just by building more roads.

“More roads means more vehicles on the roads and more traffic congestion. Even using the bus you will be caught on the road with the traffic jam,” he said in his winding-up speech.

Abang Johari cited that the typical example was the Kuching and Samarahan areas which, before the construction of the Kuching-Samarahan Expressway, were only served by the Kuching-Penrissen-Muara Tuang road.

He noted that the Kuching-Samarahan Expressway was built to provide an alternative road and to reduce the traffic congestion problems.

“Now however, the new Kuching-Samarahan Expressway is always congested, especially in the morning and after office hours.

“I am getting a lot of complaints from commuters traveling along these two destinations, expressing their frustration of long drive times and bad traffic,” he said.