Wednesday, July 15
You are at:Home»News»Shafie Apdal calls on Sandakan voters to choose DAP in campaign finale 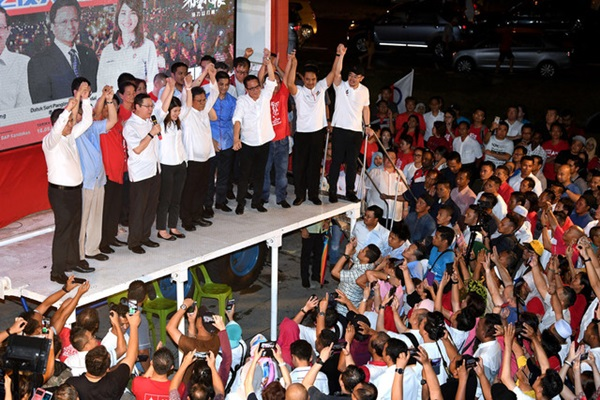 Mohd Shafie said the victory of the DAP candidate will strengthen cooperation in the state government. Bernama Photo

SANDAKAN: Sabah Chief Minister Datuk Seri Mohd Shafie Apdal made the last call on voters to give their support to the DAP candidate in the Sandakan by-election polling starting at 7.30 am tomorrow.

He said the victory of Vivian Wong Shir Yee, 30, would ensure the original state of Sabah under the Malaysia Agreement 1963 (MA63) would be restored by voting for the Constitutional Amendment at Dewan Rakyat.

“We have the right and desire. Sabahans want the whole Malaysia to know that we are partners with the same status.

“Make sure our representatives voted in Parliament. This Constitutional Amendment is important to us,” he told a grand finale ceramah for the Sandakan by-election here tonight.

Mohd Shafie said the victory of the DAP candidate will strengthen cooperation in the state government under the leadership of Parti Warisan Sabah with Pakatan Harapan and UPKO.

“If you are a voter in Sandakan, choose Vivian Wong to make it easier for us to cooperate in implementing the agenda to make Sandakan as a dynamic town.

“Vivian is a dynamic person who has been accompanying her father (Datuk Stephen Wong Tien Fatt) on all matters relating to the people and she knows the problems faced by the people here,” he said.

Vivian was seen wiping her eyes when Mohd Shafie mentioned his close ties with her late father when he was the Sandakan MP.

When delivering her campaign finale speech, Vivian who was holding her tears back pledged to work hard like her late father and would not betray the people.

The Sandakan parliamentary seat fell vacant following the death of Stephen Wong of a heart attack on March 28. – Bernama