Sunday, September 19
You are at:Home»Business»BizHive»How Myanmar is improving its transportation 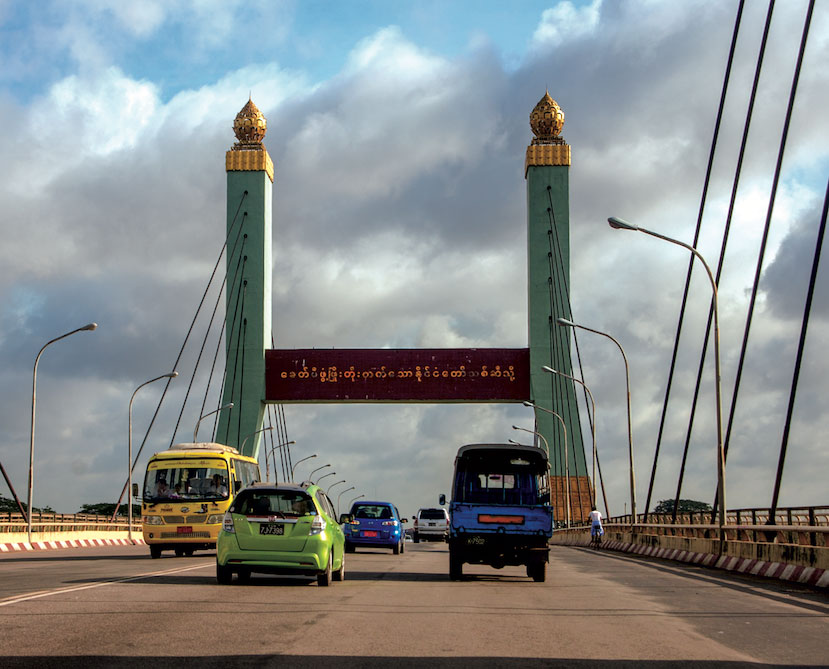 Myanmar has continued to roll out new transport projects as part of its major infrastructure drive, with upgraded road and rail networks set to unlock economic development and provide opportunities for private investment.

The Thai-funded bridge in Myanmar’s east, which connects the city of Myawaddy with Thailand’s Mae Sot District over the Meoi River, cost around US$126 million to construct and is expected to greatly improve both transport and trade connections between the countries.

This development followed progress on another two bridge projects in the capital Yangon in recent months.

In mid-February the authorities unveiled a groundbreaking ceremony for the Yangon- Thanlyin Bridge, which will connect the capital with the Thanlyin township to the south-east. The project is being funded by a JPY31 billion yen (US$278.4 million) low-interest loan from the Japan International Cooperation Agency (JICA), and is expected to be completed by the end of 2021.

Meanwhile, in December construction began on another road bridge linking the capital to the Dala township to the south-west.

The US$188.1 million project, which will receive US$137.8 million in funding from South Korea’s Economic Development Cooperation Fund, plus another US$20 million loan from the country, is expected to be completed in 2022.

The increased activity comes amid significant efforts to address the existing infrastructure deficit.

The Asian Development Bank (ADB), in its ‘Myanmar Transport Policy Note’, released in 2016, estimated that the country needed some US$60 billion in transport investment between 2016 and 2030.

Highlighting the shortfall, the ADB stated that some 20m people were without basic road access, while 60 per cent of highways and most rail lines were in poor condition.

Furthermore, even though the national paved highway network had increased by 35 per cent between 2012 and 2016, the number of vehicles in the country had doubled and travel within Yangon had become two to three times slower, with public transport operators losing some 35 to 65 per cent of the market.

To improve the situation, the then-government launched the National Transport Master Plan in 2014, which identified 10 main corridors crucial to improving the country’s transport network.

One of the major links in this plan is the upgrade of the US$3 billion, 620km Yangon-Mandalay rail line. Work on the first phase of the project, financed in part by development funding from Japan, began in November 2018 and is expected to be completed by 2023.

Once fully complete, the upgrade of the entire line is expected to slash travel time between the two cities from 12 hours to about eight.

Furthermore, work also started last year on the Yangon Circular Railway upgrade, a 46-km, 39-stop commuter link that transports some 77,000 people in the capital each day.

The project, financed through a US$250 million loan from JICA, is expected to cut travel time on the loop from three hours to two hours once completed in 2022 or 2023.

“The circular railway is the initial step towards shifting from a car-based city to one based on a widespread public transportation network,” Masayuki Karasawa, the chief representative of JICA’s Myanmar operations, told OBG.

“At present, around 60 per cent of the public travel by bus, 20 per cent in taxis, while only one per cent take the train. We are working to grow rail’s share of the transport mix to around 30 per cent.”

Participation from JICA has also been crucial in developing long-term plans to improve Myanmar’s logistics capacity. Since December the agency, in collaboration with the Ministry of Transport and Communications, has been working to establish a National Logistics Master Plan (NLMP), which aims to develop infrastructure capable of handling an expected 85 per cent rise in cargo movement to 312 million tonnes by 2030.

The NLMP will also include 167 project proposals designed to create an efficient logistics system that would encourage foreign investment, as well as assist in unlocking industrial and agricultural development.

PPPs are seen as an efficient and cost-effective way to fund and construct large-scale infrastructure projects, while leveraging the skills and expertise of leading international companies.

One such project is the Yangon Elevated Expressway, a 47.5km ring road around the city that will connect Yangon Port with Yangon International Airport, Mingaladon Industrial Park and the Yangon-Mandalay Expressway.

In December the Ministry of Construction announced that it had shortlisted 10 local and foreign companies to carry out the first phase of the project, with a final decision expected in the middle of this year.